Focus on Kiwanis Club of Dayton

Building community, one child at a time 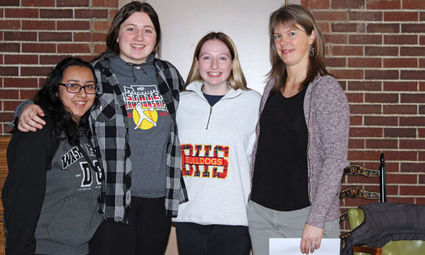 Dayton High School seniors Roselin Burris, Sadie Seney, Mackena Culley, Adam Puckett (not shown) and their advisor Shayna Hutchens went to Washington, D. C. in Nov. 2019 as part of the Road to Leadership program, which was paid for by the Kiwanis Club of Dayton. Dayton Kiwanis has contracted with the Close-Up Organization to provide students with the opportunity to experience travel, and provide a living classroom for them to explore U.S. Government, history, and culture. The students thanked the Kiwanians during a Kiwanis Club of Dayton meeting, last week. Last year's trip cost about $10,000.00. Club President Chuck Reeves said there was a very sizeable donation from one committed individual, for that trip. The rest of the money came from donations, through the Community Network, and from Kiwanians who raised funds by flipping hamburgers and hot dogs, at community events, to help pay for the trip. The students, themselves, raised around $850 to pay for their personal expenses.

DAYTON-Judi Pilcher is a Kiwanis Club of Dayton Director and she would like people to know the organization is more than just a hamburger cooking organization.

They do, however, sell hamburgers and hotdogs, at community events, and they sponsor the annual Turkey Bingo fundraiser, all to help pay for programs for local youth.

Pilcher said, with the exception of Club dues, all the money made through fundraising efforts goes to programs for youth.

About $18,000 is generated each year through fundraising and helps support the following programs; The Club for Boys & Girls, Girl Scouts, Camp...