Karl Burnstad noticed his mother had been sleeping longer than normal and was unable to wake her up. He quickly called 9-1-1, and got his mother the medical attention she needed, saving her life. 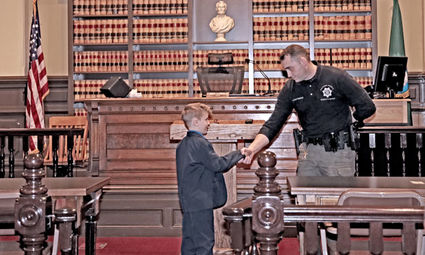 On November 12, 2019, Karl Burnstad, then only 6 years old, noticed that his mom, Tracy Burnstad, had been sleeping longer than normal and wouldn't wake up. Karl was able to locate a cell phone, call 9-1-1, and answer the dispatcher's questions, all while keeping his younger siblings calm. Tracy was experiencing a diabetic emergency.

"Karl's response to this emergency and the information he provided resulted in his mother getting the medical help in a timely matter, and directly saved her life," Officer Patterson told more than 30 of Karl's friends and family.

Officer Patterson presented Karl with the Columbia County Sheriff's Department's Life Saving Award as well as a challenge coin. Challenge coins have a long history of being awarded in recognition of special achievements. The Life Saving award is the department's highest civilian award and has only been awarded twice in the last 39 years.

Keith Viverios, representing RapidSOS, attended the ceremony and was 'proud and honored' to present Karl with his company's national Life Saving Award and a challenge coin. He thanked Karl for taking control of the situation and getting his mother help she needed.

Viverios also presented an award to Nylah Holt who along with Cindy House (who was not able to attend) handled Karl's emergency call.

Columbia County Dispatch utilizes RapidSOS technology, a platform for smartphones, connected cars and wearable devices, to provide first responders with essential emergency information. This technology was essential in providing dispatchers a more accurate location for the Burnstad home which is located in a remote area.

"Our technology is just a tool, and the tool is useless unless the dispatchers use it properly," said Viverios. "Everyone knows that the dispatchers are the 'first' first responders. They are the ones on the front line."

Karl was also recognized by Garfield County Deputy Jim Nelson. Officer Nelson is Pomeroy School District's resource officer and said he received a personal invitation from Karl, who attends first grade there. Officer Nelson explained that he sees Karl every day at school and Karl always asks for a badge sticker. The resource officer said he had been out of stickers for a while and asked if a real police officer's badge would do while he waited for more stickers. The awe-struck look on Karl's face answered the question clearly.

It is estimated that there are 240 million 9-1-1 calls made in the United States each year. In 2019 Washington State alone reported 6.8 million calls. These statistics highlight how susceptible we are to an emergency, and why it is so important to teach children about 9-1-1 and how to use it. Karl Burnstad first learned about 9-1-1 at a summer reading program in Garfield County, after reading 'Impatient Pamela Calls 9-1-1.'

It is widely recommended that kids start learning about 9-1-1 around the age of 4. Establish what an emergency is, like a fire in the house or someone having trouble breathing. Practice answering dispatcher's questions: 'Where do you live,' 'who needs help,' and 'what is your emergency.' Kids who are comfortable talking to first responders can save lives, as Karl Burnstad proved last November.