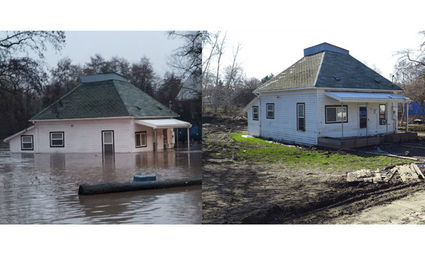 Waitsburg is still cleaning up after the February 7 flood event. This home on Preston Ave is now on dry land. Volunteers from near and far have assisted greatly with the clean-up activity.

WAITSBURG-The Waitsburg City Council met February 19 at the Waitsburg Elementary multipurpose room. Present were all council members, Mayor Marty Dunn, and City Administrator Randy Hinchliffe. Karen Gregutt, chairman of the Planning Commission, let the council know she will be attending city council meetings on behalf of the commission, to relay suggestions and advice from that committee.

Administrator Randy Hinchliffe proposed moving the city election process to Walla Walla County and the Walla Walla County Auditor's Office. Keeping elections in the city can put the employees at City Hall in a potentially poor position due to the perception of a lack of transparency as employees are counting and validating the election of their own bosses, said Hinchliffe. The county has the programs and equipment necessary to run an election and perform the above duties, he said.

Former mayor Markeeta Little Wolf urged the council to vote down the proposed city election changes. Little Wolf listed off the changes to the city's charter, including the loss of the city treasurer, city assessor and tax collector. She encouraged the council to keep the city elections within the city to hold on to the last little bit of the 'One of a Kind' lifestyle of Waitsburg.

Councilwoman Kate Hockersmith expressed that she saw a decline in the voting process when they took away the portable ballots and went to mail-in ballots. Hinchliffe expressed it was difficult to find volunteers to man portable ballot stations. He also said that he has explored other options to run the elections, like using a law firm or other official office, but the state will not allow elections to be held that way.

Councilman K.C Kuykendall commented that he is not a fan of change for the sake of change, however, he recognized that the 'appearance of fairness' is crucial, and that the county has a system of checks and balances that helps keep the fairness intact. He said that he felt that there are bigger, more important things that make Waitsburg 'One of a Kind.' Kuykendall noted that he will not be running again, and he doesn't have a vested interest in the electoral system changes, but he said he would like to see the voter footprint expanded to longtime community members that don't live within the city limits.

The proposal would lower costs by extending the terms for the council members and staggering the elections to every two years, however, the costs to run the elections would be relatively the same whether it was run by the city or the county, said Lane Gwinn, owner and publisher of the Waitsburg Times. In an article from February 13, 2020, Walla Walla County auditor Karen Martin estimated the cost of running the city elections at $2,206.

The council passed a retainage release for the Taggart Road extension to the contractor, Anderson Perry. The council noted that there would be some repair needed due to flood damage, but Hinchliffe said that they were expecting to have to make minor adjustments before paving it, regardless.

Hinchliffe said that he had received many questions about not utilizing the flood siren on February 7th. The siren wasn't sounded due to the isolated area of the flooding and he felt it would create a city-wide panic, said Hinchliffe. Councilwoman Hockersmith asked that, in the future, the siren be sounded regardless.

"Instead of putting one person in danger, I would rather wake up the whole town, more than once," Hockersmith said. She noted that there were children whose bedrooms are in basements of many homes in Waitsburg and the siren could be the difference between life and death.

Hinchliffe discussed the ongoing flood mitigation study.The city has been working with the Corps of Engineers to evaluate the structures around the rivers to see how different options would handle a 100-year water event. A 100-year water event has a waterflow of 10,000 cubic feet per second. One project that was suggested as a result of the study was to excavate the riverbed near the Highway 12 bridge. The project would include clearing out aquatic plant life. The number one suggestion from the study was to rebuild the dike that stretches from the Highway 12 bridge to the Waitsburg Grange. There was a breach along that stretch of the dyke that resulted in a 200-foot hole, said Hinchliffe.

The City is responsible for 50 percent of the study's costs. The study cost $450,000 leaving the City of Waitsburg to pay $225,000. The city has already made payments and Hinchliffe estimated that the city has $80,000 left. If the city is unable to make the payment this year it will lose future benefits and resources offered in the original study agreement.Building permits are required for homeowners that need to remodel or rebuild due to flood damage. Columbia County has opted to waive all building permit fees, and the City Council agreed to honor that waiver.

Kyle's Demolition provided trucks and labor and took 5200 yards of rock from the city-owned quarry to help with flood fighting efforts in Waitsburg. The City received a bill for $49,000 for equipment rental.

Hinchliffe presented the council with suggestions to redirect money from the current budget to help pay for the city's flood costs. The suggestions include closing the city pool and a tax hike on utilities. An emergency loan was also suggested. There is not enough money in the budget to address costs from the flood, even with redirecting budgeted money from other city programs, said Hinchliffe.

Councilman Kuykendall suggested that the council wait until March to make any money-saving decisions. He felt that it would allow the council the needed time to explore state and federal relief money opportunities. Kuykendall urged the council to approach the government and request a direct appropriation be made for Waitsburg. The council agreed to wait until the March meeting to further discuss the matter.

Mayor Dunn expressed many thanks to everyone involved with the flood efforts. He extended a special thank you to Liz Jessee and the Walla Walla County Emergency Management department, Pastor Matthew Wyatt and the team at First Christian Church, and the volunteers from near and far that had been helping with clean-up efforts. He wanted to thank everyone that was a 'neighbor to a neighbor.'

Mayor Dunn shared a letter that he received from a citizen about City Clerk Brittany Zuger, and her aid to a stranded SWIFT truck driver on Lower Waitsburg Road. Zuger was contacted at City Hall and quickly arranged a tow for the truck driver.

Councilman Kuykendall expressed gratitude to our 'neighbors in the east,' Dayton residents like Bryan Martin who has been involved in the incident command and donated countless hours and equipment, and Cindy John, who offered a lot of help with clean-up efforts.

City Administrator Randy Hinchliffe reported that the electric car charging stations have been installed at the City Shop. The stations, which were funded by grant money, cost roughly $6,500.

The meeting adjourned after the approval of bills.