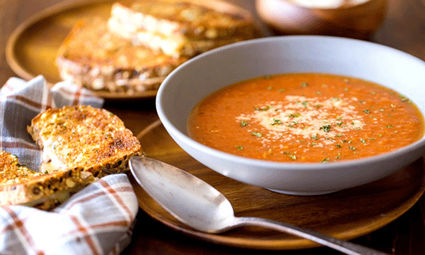 It's still January and gloomy, so I'm still in soup mode. I continue to stare at my Instant Pot, while trying to muster up the courage to use it, but right now, I'm sticking to my stock pot. However, here's an interesting anecdote to my Instant Pot saga. When Daniel, (the chef), was here over the holidays, he used the Instant Pot to make tomato sauce. While it was venting, the steam coated the cabinet door. Being "clean as we cook" people, he rubbed down the cabinet with a kitchen towel, and voila! The varnish peeled off the cabinet. This could be an added benefit to the Instant Pot. Instead of new cabinets, I can make soup or sauce while removing varnish, readying the cabinets for a new coat of paint.

Homemade bread is another winter doldrum pick-me-up. The smell of freshly baked bread floating through the house is comforting, warming and best of all, usually good to eat. It can almost make canned soup palatable.

Winter in a wet Waitsburg has taught me a few things about bread baking. My tried and true Los Angeles recipes work well in the dry L.A. climate, but not so much here. My first batch of dough looked like porridge, I added flour and turned it into a bread brick! More experimenting needed.

I recently perused through one of my old cookbooks, Sundays at Moosewood Kitchen, a holdout from my more hippie days. The book is organized by country, and there, smack dab in the middle of the Finland chapter is "Juurikasviksiakeitto" which translates as root vegetable puree. These are classic vegetable combinations and make great winter soups.

First is, Rutabaga and Carrot Soup, the recipe calls for adding two cups of orange juice. I would not add that much, but that's a matter of taste. Another combination: Turnip and Pear Soup, this one calls for the addition of pear or apple juice. Third and most classic of the three: Potato, Celery Root and Parsnip Soup. (recipes available at recipiesbyvicki@gmail.com).

The chef Michel Richard, owner of the restaurant Citrus, where Daniel and I worked (and where we met), also wrote two cookbooks. His first one has some great soup recipes, one of my favorites is the Sweet and Sour Corn Soup. It's easy, and if you still have some Lambert corn around, this would be fabulous!

The USDA has replaced the old food pyramid with 'My Plate' to provide nutritional guidelines. They recommend we eat five servings of fruits and vegetables every day. Some soups can solve that five servings in one bowl. A hearty vegetable soup or minestrone can certainly do the trick. Add some meatballs to the minestrone and you've got a meal in a bowl. Chicken to the vegetable soup-same thing. And, not to be redundant, but one bowl, one dish to wash!

While some of us are still trying to lose some holiday pounds before gaining them back at a Superbowl party, start dinner with a cup or bowl of soup. It can be pretty filling, so you eat less of the main entrée.

When Weight Watchers was first launched, they provided a recipe for a vegetable soup that was a "free" food. I made it once and decided I would rather starve. I intentionally wiped the recipe from my mind, but I do remember it included a lot of cabbage. If you could get past the smell and take a bite, you're a better person than I am. Today, if I crave soup and don't have any homemade, the box of Tomato Red Pepper Soup in my pantry works just fine.