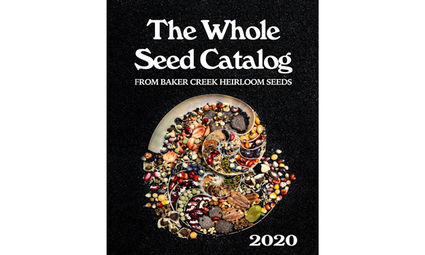 EARTH—As this unseasonably warm winter weather persists, it's easy to envision spring is on its way. So much of cultivation is cumulative. Last year's lessons prevail. I started sunflower and anaheim pepper seeds in March in hopes that they would be transitioned into garden beds by April. Those plans were dashed when it snowed March 20 and that cold persisted for several more weeks.

Even once the snow melted, the ground would freeze sporadically. Several of the starts did not make it. One quick dalliance below thirty-two degrees and the seedlings wilted. Luckily there were plenty of extra seeds to sow directly into the ground in mid-May.

Learn from my mistakes: no matter how lovely April is, no planting should happen until Mother's Day.

Until then, there's plenty of time to plan ahead.

Garden expansion: Not including the sunflowers which were planted along the fence line, last year's garden beds totaled 108 square feet. In it, dahlias, three varieties of peppers, strawberries, cucumbers and cantaloupe thrived. This year I intend to double the amount of space, adding carrots, tomatoes, and onions to the ranks.

January: Sketch out the plan, and order seeds accordingly

My not-so-secret favorite seed shop is Baker Creek Heirloom seeds. Don't go to their website unless your resolve is strong. It's easy to want one of everything.

To make my garden expansion dreams come true, I'll be employing the assistance of an electronic tiller. With it, I'll do in a matter of hours what took me weeks last year.

Warmish day in March: Till out the ground, if it's not too hard packed.

What will you grow next? Share your sketches and plans with brianna@waitsburgtimes.com.