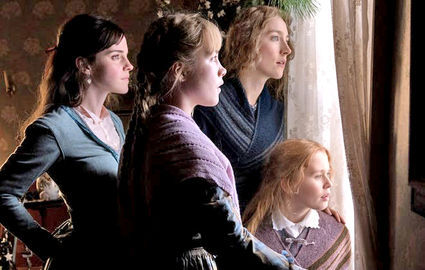 Writer/Director Greta Gerwig’s (Lady Bird) new adaptation of Louisa May Alcott’s 1868 novel Little Women was a marvelous Christmas gift for this viewer on that day. With a runtime of 135 minutes, the Civil War era domestic drama offered a plethora of viewing pleasures; a lively cast, beautiful outdoor settings, and delightful costuming among them.

Although familiar with the basic story line, it had been awhile since I had read the novel, and I never got around to seeing the 1994 version starring Winona Ryder as Jo March. Gerwig’s version tweaks the story line by jumping back and forth through time, contrasting the young women with their older selves, and scenes of hardship and struggle with happier times.

The casting is surely a gift. Saoirse Ronan as Jo absolutely shines in this role. Looking uncannily like a young Meryl Streep, who appears as Aunt March, Ronan’s expressive face and her character’s determination and fierce independence are a viewing pleasure.

Florence Pugh as the winsome Amy, also eats up the screen, her large eyes and pillowy lips, along with her remarkably husky voice, demand the viewer’s attention. Emma Watson as marriage-minded Meg, and Eliza Scanlen as the meek and sickly Beth, while basically looking nothing like one another, nevertheless convey a warm sense of family togetherness and an onscreen bond that drives the story forward.

Some twenty minutes into the story, we finally meet the matriarch of the family, Marmee—and seeing the inimitable Laura Dern in the role is like another Christmas gift, so warm and determined, so full of character and determination.

The conflicts inherent in being a woman in the 1800’s are expressed in every character’s storyline. We see Jo struggling to make it as a professional writer, with an editor who urges her to include more crime and drama and ‘spice’ in her stories, and Meg, falling for the neighbor boy Laurie’s tutor, a match that will not provide the financial means the family needs to support itself.

The love triangle between Jo, Amy and that neighbor boy, played with incandescent charm by Timothee Chalamet, provides a moral charge to the movie, with Chalamet initially falling in love with Jo, and even asking for her hand in marriage. Young Jo feels she must forge her own path as a writer and leaves her childhood crush behind to try to make her way in New York City.

One of the most delightful scenes in the movie takes place at a Christmas ball, where retiring Jo quietly waits out a party, only to be asked to dance by Laurie. The ensuing scene finds them madly dancing outside on the porch, busting loose in the spaces between the windows.

The cinematography is marvelous, much of the action takes place gloriously outdoors, with the young people running and jumping about on a beach, at outdoor picnics and striding along between the houses. The effect of all this natural movement brings the story into the modern age, without the stuffy mannerisms of other period pieces, I kept losing track of the long-ago setting, the action seemed so vivid and fresh.

Another delight was the costuming. As a quilter and seamstress with a bit of a fabric hoarding, I mean collecting, problem, each scene offered new textile interest. Rich paisleys, subtle checks, deep plaids, knit shawls, numerous quilts and patchwork items...heaven!

It was a bit of a jolt to finally meet Mr. March, who had been absent from the storyline as he was fighting in the war. Played by “Better Call Saul’s” Bob Odenkirk, even with period muttonchops, it was a bit difficult to separate his modern-day characters from the role of the mild and loving Mr. March. Chris Cooper gives an understated performance as next-door neighbor Mr. Laurence, but he brings real emotion to his scenes with the ailing Meg, to whom he not only gifts a piano, but also allows her to play on his grand piano at his more elegant home.

Also of note, is the remodeling completed at Walla Walla’s Grand Cinemas, now called the Cinemark Grand. The option to order tickets and select one’s seats beforehand, the cleaner premises, and the comfy padded seats made for a relaxing viewing experience. Be aware, however, that there are a good 25 minutes of ads and previews to sit through before the feature begins. Book you seat ahead of time and plan to arrive late to miss all of that?