Koby Harris has been racing remote control cars for more than two years, and recently signed a deal with a California-based racing company. 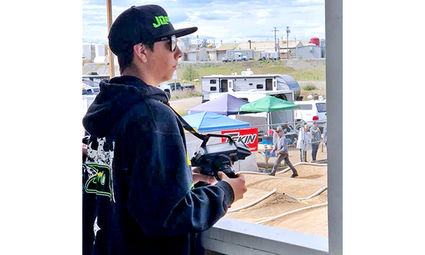 Koby Harris stands above the race track, controlling his car with his remote control during a race last season.Even though he is all business during a race, Harris's favorite part of racing is the fun atmosphere and friendly people at the races.

One of the best feelings is when you figure out what is meant by "do what you love and love what you do," and Koby Harris is figuring it out early! The Waitsburg High school student recently turned his remote control car hobby into an ambassador partnership with a California-based racing company.

Tekno RC is a California based remote control car company, specializing in racing equipment. They sell cars, parts, tools and engines for remote control cars. Harris has been using their equipment on his cars, and liked the company so much, he signed a year-long contract for 2020 to serve as an ambassador. He will continue to use and promote their products and the sport of RC car racing, as well as grow his future in the RC world.

Harris started racing remote control cars two summers ago. While at his nephew's BMX race in Walla Walla, he heard cheering and shouting that didn't belong to parents at the BMX race.

"I heard something going on, so I decided to go check it out. They were racing RC cars, and I was immediately interested," Harris said. "The environment was so exciting from the beginning." Harris said that the RC car community was very supportive, and included everyone from hobby racers to veteran professionals, and that the community has stayed that way since he started. It's part of the RC car culture.

Harris explained that he races in the NW Championship series. He competes against racers from Washington and Idaho in a six race series. Roughly 300 cars race in this series, and Harris said that he has seen racers as young as eight years old. Racers young and old are always welcome.

Looking to the future, Harris says he is exploring career options in the industry. His current partnership with Tekno RC has the potential to open up big doors for him, and he is excited to represent the Tekno RC brand. Right now, he's simply focusing on having fun and enjoying his races.

"If you go out and just have fun, you have nothing to lose," Harris said. He encourages people to come check out the races, even if it's just to spectate. If you got a remote control car for Christmas or you've been interested in racing, check out the race track at Fort Walla Walla City Park.