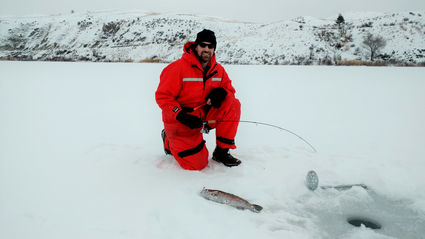 Brad Trumbo jigs up a fat rainbow on a central-Washington lake.

January is a tough month. Barely emerging from the shortest day of the year, we immediately embark on those dreaded New Year's resolutions while looking across the arduous 348 days that lie between us and the next Christmas/New Year holiday season.

Even more frightening is the impending closure of the upland game and waterfowl seasons later in the month. February cabin fever looms on the horizon like a blizzard riding an El Niño jet stream. The doldrums are nearly upon us, and it seems that the only folks with something to look forward to are those who ski.

Back in my high school days, I would fire up my old Bronco, kick it into 4X4, and blaze a few snowy mountain trails in the National Forest. Sadly, I matured just enough over time to kick the joy-riding habit, yet fell victim to another vice of the winter months. Picture a wind-swept landscape with snow-covered, timbered ridges rising in every direction. A small jet sled rests at my side containing an ice auger, chisel, depth flasher, a couple 30-inch jigging rods and a thermos. My pocket contains a bathymetric map of the lake that lies cloaked in darkness beneath my feet.

My first experience with ice fishing was like baptism. It opened my soul to winter rejuvenation. A college buddy and I rolled up to southern Vermont to meet his uncle and a friend of his on the ice. We fished tip-ups, which are small, folding frames with a spool of line and a flag. You drop the line through the ice, bend the flag to a catch point that also holds the spool in place, and set the frame over the hole. When a fish takes the bait, the flag pops.

Regulations allowed six lines per angler at the time, so we set 24 tip-ups baited with live minnows. The action was slow. At first. A flag would pop here and there with plenty of time for chewing the fat and sipping cayenne-laced hot chocolate. But as the day wore on and the temperature warmed a bit, the flags came quick and steady. I don't recall how many fish we caught that day, but there were times when all four of us were running between tip-ups with as many as a dozen flags up at once and more coming.

That was the first time I caught northern pike or chain pickerel. I was instantly hooked and immediately invested. How I ever earn my bachelor's degree is mystifying given I lived out the remainder of my New England winters racing toward a PhD in ice fishing.

The hardwater season generally runs January through early March, and is dictated by ice as much as fishing regulations. The season is a bit shorter in some areas of Washington as temperatures don't stay cold enough to make safe ice or keep it safe very long, particularly in our little corner of the state. But if you are willing to put a few miles on the SUV, north-central Washington provides some fine opportunities beginning in January.

One of my favorite destinations is Patterson Lake in Twisp. Twisp is a quaint little mountain town, good for a visit any time of the year, and its cold enough to keep Patterson locked up safely for some good ice fishing. Rainbow trout and my first kokanee came on tip-ups at Patterson a few years ago.

Another solid choice, seeing more than its fair share of pressure, is Fish Lake by Lake Wenatchee State Park. The scenery is gorgeous and the yellow perch plentiful, but finding a fishing spot can be tough on the weekends with the wealth of fishermen, ice skaters and hockey players, when the ice is good.

Also, in the Chelan area are Roses, Wapato and Antilon Lakes. These lakes all offer warm- and cold-water species. Roses is one my favorites with chunky sunfish and black crappie, feisty rainbows, and the occasional largemouth bass, but it's the trout and yellow perch that really draw me.

Have you ever eaten walleye? (Assuming you nodded "yes"). Closely related to walleye, yellow perch offer equal table fare; flakey, white and mild flavored. Lightly battered in the pan, yellow perch makes Baja fish tacos to die for. Trout are tasty too, but they have nothing on yellow perch when it comes to the dinner plate. On the other hand, trout fight well in cold water and get big in many Washington lakes. The yellow perch; not so much.

Given the two-pole limit in Washington (that is, if you are willing to fork over extra cash to use a second line), I set a tip-up and jig the time between flags, or explore other areas with the jig rod while still fishing the tip-up. I generally target the same areas for either technique.

Bathymetric maps are critical to identifying productive areas. I look for humps with a base between 10 and 20 feet deep that rise up four to eight feet. Yellow perch spend time on top of and around these humps. I like to drop my bait or jig to the base of the hump, then work my way up the side to the top. This means punching a few holes around it to work it over properly. Another option is looking for saddles between two humps within that same 10 to 20-foot depth range. I punch a series of holes across that saddle to fish each depth and location.

Yellow perch tend to school up. Finding one generally means finding many. Conversely, trout tend to cruise around, requiring a bit more patience. One technique that has worked well for me on trout is finding a shallow point extending from the shore into deeper water. If I can locate a sharp drop on that point, I will set up and jig there for up to an hour before trying another spot or moving shallower along the same point. This has put some of my largest trout on ice.

Meal worms and nightcrawlers are my go-to baits for tip-ups. I prefer to jig with glow-in-the-dark jigs about 1/32nd to 1/64th ounce. I usually tip the jig with a small piece of nightcrawler as well. Drop the tip-up bait or the jig to about six-inches off the bottom. You may need to experiment with jigging speed to entice a strike.

Regardless of what species or technique you try, don't be afraid to move around. Sometimes you have to probe the depths of a few different areas before you can locate feeding fish. And I don't recall a trip where I didn't catch trout when targeting yellow perch.

Best of all, ice fishing is family- and pet-friendly. Dogs, kids on skates, lawn chairs and grills are common among hardwater fisher folk of all nationalities stretching from here to Maine, in my experience. The only way to avoid fun is to take it seriously.

If you take to the ice this winter, remember to exercise caution. Six inches thick is my minimum safe-standard for weight-bearing ice as I am coming in at about 270-pounds these days. Clear, black ice is as pure and strong as it gets. White ice has impurities such as air bubbles and potentially debris that can cause weakness. Always carry a length of rope to toss to someone in the event they fall through. Never try to approach too closely and risk falling through yourself.

I personally wear a Coastguard-approved arctic survival suit with built in thermal and floatation layers. I look foolish, but stay comfortably warm. I also keep a pair if ice picks strapped to my body that I can used to pull myself up onto the ice if I fall through. A wealth of additional safety information is available online.

With that said, don't let the safety talk deter you. In all my years of ice fishing I have yet to see anyone break through. And, to be clear, the only necessary gear is an ice auger and a fishing rod. No need to drop a paycheck on Amazon for a boat-load of gear that you may only use twice per decade.

If you are anything like me, you dread the months ahead and suffer an unfortunate ailment for northern latitude; a severe allergy to downhill skis. If so, round up the family, throw the dog in the back, and slip out on the ice for some care-free fishing. By the end of the day, you should have a few tasty fish for the pan and plum tuckered kids. And if all else fails, you will at least enjoy a renewed appreciation for the warm confines of home.