Members prepare and serve dinner to their families at monthly meeting 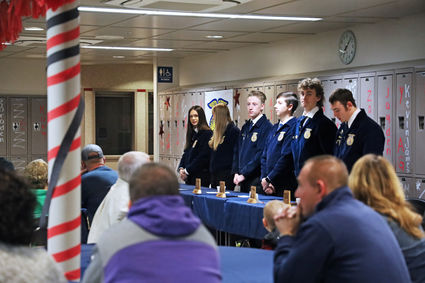 WAITSBURG- The Waitsburg FFA held their monthly meeting this last week, but the meeting had a twist: The officers invited parents and community members and served a dinner that was made from local commodities, as part of the agriculture advocacy quality set by the National FFA Organization.

The National FFA has three quality categories as part of the National Chapter Career Development Event (CDE): Growing Leaders, Building Community, and Strengthening Agriculture. The National Chapter CDE recognizes chapters that implement the FFA mission and strategies to build a stronger chapter. The Waitsburg FFA has competed in the CDE for many years, and they have set a goal to be recognized as a three-star chapter after their recent trip to the National FFA Convention. The members who attended the convention watched the three-star chapters compete and brought home valuable tips and observations.

The November meeting hosted roughly twenty guests who enjoyed a selection of locally-produced meat dishes, bread made from locally-grown grains, and salads that contained vegetables from the area. The FFA members (and their parents) made the dishes. Some of the commodities used, like beef and pork, were the result of members' Supervised Agriculture Experiences. The dessert table showcased fresh pumpkin pies, berry crisps, and a variety of other sweets.

The FFA officers set out little cards with the dishes that explained what the main commodity in the dish was, where it was grown or produced, where it can be found locally, and when it was harvested. The officers and members discussed the commodities with the guests, as well as gave an update on the upcoming Festival of Trees and other events.