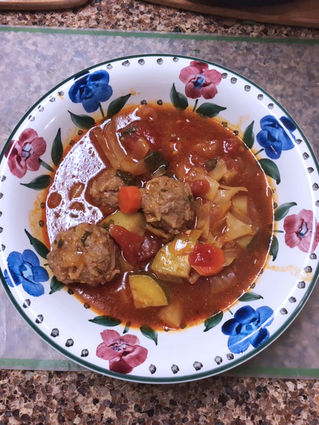 Albondagas means “meatball” in Spanish. This is considered a Mexican soup. What caught my attention originally, was I thought the description said rice meatballs, thinking it was rice balls formed like meatballs. So I mentioned to my yoga class I was going to make this soup that had rice balls. They asked, “How do they stay together?” Good question!! I then went back to actually read the recipe and of course it uses hamburger and rice, which stays together nicely.

I’m also guilty of speed reading the recipe. I thought the cilantro went into the soup (as it also goes into the meatballs) but it was for garnish on top. I thought it was great in the soup but you can decide.

I didn’t have the 8 ounces of tomato sauce so I used a 6 ounce can of tomato paste. That was a good choice.

15 oz can diced tomatoes, do not drain

Salt and pepper to taste

For the meatballs, place the beef, rice, garlic, egg, cilantro, cumin, salt and pepper in a large bowl. Mix until thoroughly combined. Roll the meat mixture into ¾ inch sized meatballs, Place on a tray

For the soup, heat the olive oil in a large pot Add the onions, and carrots and cook for about 4 minutes.

Add the garlic and cook for 30 seconds. Add the potatoes, beef broth, tomatoes, tomato sauce, cumin and oregano to the pot. Bring to a simmer

Simmer for 10 minutes. Drop the meatballs into the soup and simmer for an additional 10 minutes.

Add the zucchini and cook for 5 minutes more. Season the soup with salt and pepper to taste.

Sprinkle with chopped cilantro, then serve.

I’m glad I substituted the tomato paste for the tomato sauce.. As I mentioned, I put the cilantro leaves into the soup. For seasoning, I added a bit of garlic salt and Johnny’s seasoning salt. I know some you who like spicy soups may add chili peppers.

I had half a head of cabbage so I chopped it up and added to the soup.

I started making the meatballs about two inches and realized that would be too big, so I made them smaller, more like one inch or so.

Most of us seasoned cooks don’t follow those instructions that tell you to sauté this or that for two minutes or four minutes. I just add the ingredients as they get chopped!!

I simmered the soup about twice the time it said. The meatballs were done and very tasty. I’d make the meatballs by themselves for another dish.

For me this was a great soup for a chilly night, served with toast.