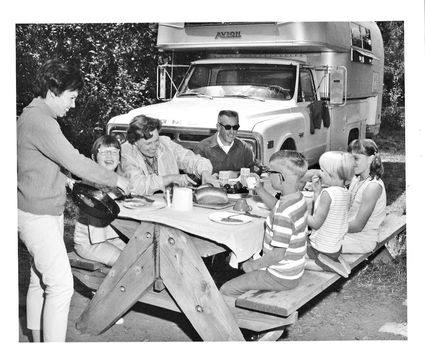 Carol Anderson, her mother Edith Massey, and her husband Andy are shown with the Kaye and Lester Eaton family at Lewis and Clark Trail State Park for a photo shoot on camping and sourdough pancakes for an outdoor magazine.

Anderson said she wasn't the only female county agent, here. Rosealee Boyd, and Faye Rainwater served before she did and Cathy Lyman, served after she did. There were other women who served as county home extension agents, for shorter periods of time, she said.

"They were generally fairly young women, out of college. A couple of them were married and their husbands had jobs that coordinated down here," she said.

All county agents had to have a college degree, Anderson said.

Anderson received a B.S. in Home Economics from the University of California at Northridge, in 1967, at a time when women were expected to get married right out of high school.

She remembers signing up for classes during her college freshman year. First year students were the last ones to register, she said.

"I had to go to a counselor to get him to okay the schedule. He said it didn't make any difference. 'You're going to drop out, anyhow'," she said.

She stuck with it, though, and attended a job fair during her senior year, to see where she might get a job.

"So I go over there and there are all these businesses set up, with their men, and all the male students are going in and filling out applications. There wasn't a thing for women. Nothing," Anderson said. "Everybody else was going to be a teacher and I didn't want to do that."

So she asked the people who organized the job fair to look into opportunities for her.

She was working at Lockheed Martin, when they contacted her and told her about three places she could apply to be a county extension agent.

Washington State was her first choice because she thought there would be lots of rivers and lakes and cherry trees.

"I didn't know about eastern Washington," she said with a chuckle.

Anderson said she arrived from Burbank, Calif. in the spring of 1968.

"I felt like I was coming to another country. I only had warm weather clothes, and one of the first things I did was let the hems down in my dresses," Anderson said. "Short dresses were inappropriate, here."

She was only 23 years old when she started working alongside her mentor County Extension Agent Art Sunderland, in the Dayton office.

She said her training took place in Pullman and in several other counties.

"I worked in Wenatchee for three weeks and then I worked in Moses Lake for a couple of weeks. They both had two female extension agents in the office," she said.

Anderson's main job was to provide home-related information to the community through a newsletter, over the phone, through presentations, and through a column published in the Dayton Chronicle.

Both agents were involved in 4-H; Sunderland with livestock, and Anderson organizing 4-H Camp, presiding over monthly meetings, and organizing 4-H contests.

Anderson remembers the time some migrant women attended an extension-sponsored sewing class in the conference room at the Post Office.

"There was one sweet little old lady who was a widow and she wouldn't sew anything if it wasn't black," she said.

She said she tried to entice her to use colored fabric, but it was a no-go.

"You worked hard and you didn't play," Anderson said about working in the county extension office.

"It is not a 40 hour week job," she said. "We were on call all the time and we were expected to attend all the important meetings in town."

She said the agents primarily answered to the public.

"They had ultimate control. We tried to do what they wanted from us," Anderson said.

Around the time she left the job in Feb. 1972, the home economics part of Extension Services was beginning to wind down, in part because there were other informational resources available to women, but also due to budget constraints.

"Looking back I was really lucky to get the job," Anderson said. "Overall, it was a respected job. It paid well for a woman in those times, and I learned a lot that helped me in my future professions in dealing with people."

With the holidays just around the corner, Anderson will leave you now with a tip from the Oct.-Nov. 1971 edition of the Dayton Extension Office newsletter, which she typed on an old manual typewriter.

"A little bitter berry that was once called "Ibime" by the Indians is now a traditional winter holiday favorite. This little berry, loaded with Vitamin C has been used in the past to prevent scurvy and dye rugs, and blankets a rich red color. Now the cranberry is used mainly for food such as part of the turkey stuffing, a drink, as a sauce, jelly, relish, or in fruit salads, pies and puddings. For good quality berries choose those with a plump appearance, high luster and firmness. Soft or leaky berries can give an off flavor to the whole lot. Good berries will bounce, poor ones won't. Fresh cranberries can be frozen, too, for year round enjoyment. Simply put an unopened box or bag into the freezer. When you are ready to use them just cook or grind them as you normally would. No need to thaw them."