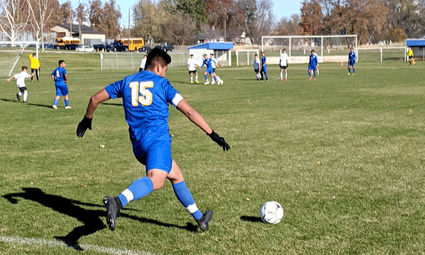 #15 Victor Garcia drives the ball to his strikers.

PRESCOTT-On Tuesday October 29th the Prescott High School Boys Soccer team played Trout Lake on Tuesday October 29th in a loser-out first round district playoff game. This was the third time these teams have played each other this season with Prescott winning the first two matchups by scores of 7-2 on Sept. 21st and 4-0 on Oct. 5th. While Prescott controlled the ball well in the first half, they lacked the drive on offense that you normally see in this team. #7 Adrian Rubio would score the first goal of the game on a nice pass by Hector Garcia.

In the 2nd half, Prescott picked up the pace...