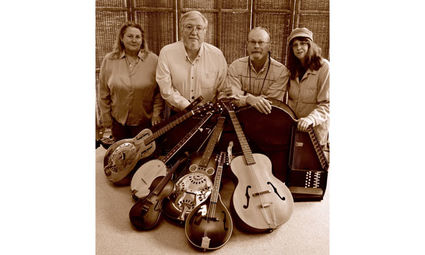 Left to right: Kate Hockersmith, Jimmye Turner, Glenn Morrison and Carrie Hendrix will perform on Thursday, November 7 at the Fort Walla Walla Museum with "Exploring the Roots of County Music."

WALLA WALLA-Jimmye Turner and Glenn Morrison along with five of their band member friends will perform on Thursday, November 7 at 6:30 p.m. at the Fort Walla Walla Museum. The musicians will share traditional country songs from the late 19th century to the mid-20th century exploring the roots of country music from Appalachian Mountain tunes and old gospel songs to cowboy western and honky-tonk hits.

The songs will be sung and played on banjo, dulcimer, autoharp, fiddle, guitar, mandolin, metal and wooden steel guitars, harmonica, and standup bass. Joining Jimmye and Glenn will be Carrie He...