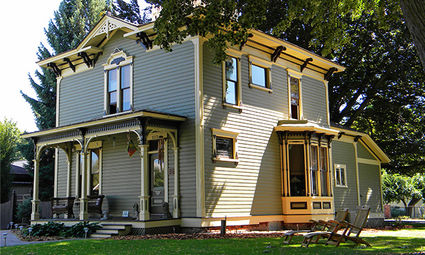 The Nilsson House reflects the formality and classicism of the Italianate style, and illustrates the adoption of fashionable national styles popular early in Dayton's history. It is one of four homes on the Annual Historic Home Tour on Sat. Oct 5.

The Boldman House Museum will also be open to the public for tours between the hours of 1-4:00 p.m. Master Gardener Susie Rogers will be in the Boldman House garden, and she will answer questions about gardening in this area. Free flower seeds will be given out.

The Dayton Historical Depot will be open from 10 a.m until 5:00 p.m. Exhibits include "Making an Impression: Daily Wear in Dayton, 1890-1989", and "Becoming Historic Dayton". The gift shop will be open, as well.

The Broughton House, Cahill House, The Nilsson House, and the McGee House have been chosen to showcase excellence in historic preservation and restoration and creative modern interpretation of diverse architectural styles, she said.

The Broughton House was built in 1885 for Morgan A. Baker, a local attorney and real estate man, who sold the house to Mr. C. J. Broughton in Sept. 1890. Built in the Victorian design this home is fashioned after houses on the Eastern seacoast and features a catwalk on the front. Five of the bedrooms, in this fifteen room house, feature rugs made by the Halpin Society of the Dayton First Congregational Church.

"The home reflects the gracious and formal past and the Broughton's 135-year history in Columbia County," Fritze said.

Fritze said The Cahill House, which is a Craftsman bungalow, was built around 1910 and was lived in by one of the five Cahill sons of pioneer Alph Cahill, until 1914.

She said the brick side-chimney has some interesting names scratched into it by the son of Mr. Carl Nelson, a school superintendent who lived in the home, in the 40s and early 50s.

The Nilsson House was originally owned by Swedish immigrant Andrew Nilsson and is one of the most significant Italianate style houses in the city, Fritz said.

The home retains much of its original character and architectural detail. The current owner has refinished the original wood floors and smooth-coated all of the interior walls to reflect the original plaster. Period appropriate colors have been utilized on both the exterior and interior.

Look for the unique collection of antique lamps in the Nilsson House.

The McGee House was originally the site of the Methodist Episcopal Church South and parsonage built in 1892.

Sam McGee bought the property from the church in 1913 and rebuilt it into a home. It is a large and spacious bungalow, which has recently undergone significant restoration and renovation. Every effort has been made by the recent owners, to keep the décor consistent with the original style of the house.

Tickets for the Annual Historic Home Tour cost $15, or $10 for Depot members, and may be purchased at the Dayton Historic Depot from 10 a.m. until 2:30 p.m. on the day of the event.

The Waitsburg Commercial Club is hosting a beer garden. There will also be an apple brandy release at XO Alambic distillery, candy apples and other sweet treats from Mama Monacelli's, and a straw pyramid and straw bale in the childrens' harvest zone, as well as a bonfire to be enjoyed by all.

Port of Columbia Economic Development Coordinator Kathryn Witherington said this is the fifth year for Oktoberfest.

"It grows and gets better each time. We invite people to spend the day touring Dayton businesses, and homes, and end it relaxing with us around the bonfire," she said.