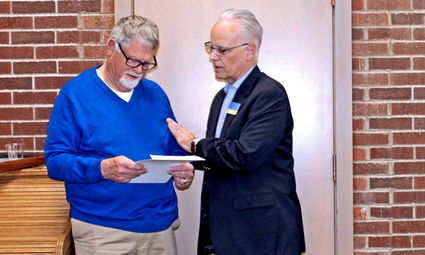 Executive Director of the Association of Washington Cities Peter King presented George with a commemorative proclamation thanking him for his contribution to AWC last April.

DAYTON-Craig George, who served as Dayton's mayor from 2008, until his resignation on April 30 of this year. He passed away at his new home in Tucson, Arizona on Aug. 15.

George and his wife, Kathy, were well-loved Dayton citizens and civic volunteers. George first served on Council in 2004, until he was elected mayor in 2008.

In April, County and City staff friends and colleagues gathered to show appreciation for George's 15 years of service to the City. City employees presented him with a gold watch and Anderson Perry & Assoc. engineers presented George with framed photos of City pro...