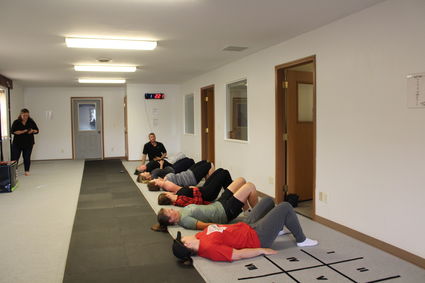 Levi Sowerby led a group through one of the exercises on the 25 minute circuit at Vive Studios, which was featured at last week's Cup of Joe.

DAYTON-When Levi Sowerby was given the news that he wouldn't walk again he got to work exploring alternative methods of healing, and within one year of receiving that diagnosis, it no longer applied.

In 2005, 17-year-old high school gymnast Sowerby was representing the state of Texas at the National High School Gymnastics Invitational in Orlando, Fla., when things went awry for him. Sowerby was warming up for floor competition with a double back flip when he felt something in his spine slip.

"When I went and got it checked out by the doctors, they said, at most, you have two weeks to walk and you will be paraplegic for the rest of your life," he said. "My lower spinal cord was being severed. It had severed by a third. I had excruciating pain from the waist down – the most extreme pain you can imagine."

When doctors offered no medical intervention, Sowerby said he went on a journey to find natural ways of healing, which included hands-on corrective alignment and massage therapy. Sowerby, who was living in Fort Worth Texas, connected with James Waslaskie, who is touted as the top body worker in the world.

"He mentored me and taught me some incredible ways to align the body, hands-on. I would go home and practice on myself. Soon, I found I was relieved of pain. I went to get checked out and there was no sign I ever had an injury," Sowerby said.

He said the moment he realized he was healed, he knew he had something special to offer, and he decided to dedicate much of his life to natural ways of healing. He specializes in corrective alignment, but massage therapy, mixed martial arts, nutrition, athleticism, and conditioning, are also specialties of his. He is also credentialed as a Master Personal Trainer, through the National Academy of Sports Medicine.

"I was accepted five years ago and made it through the program to become a Master Personal Trainer - one of 150 worldwide," he said.

For the last three years, Sowerby has been coaching individuals in the Walla Walla area about relieving pain through stretching exercises, and mentorship.

"I see the details in helping people and getting them to where they want to be," said Sowerby, who considers himself a little bit of a perfectionist.

Sowerby has connected with the Port of Columbia's Economic Development Coordinator Kathryn Witherington, who convinced him to move his business from Walla Walla, to Dayton, and to be her "guinea pig" as she kicks off plans to utilize a Port-owned office in the Industrial Park, for the incubation of small businesses.

Born to missionary parents in Florida, Sowerby has lived all over the world. He was raised in the United Kingdom and has lived in several countries as well as large cities, including New York City.

"I love the energy of New York, but I love the community of a small town," Sowerby said. "Dayton is a sweet little town I feel it has opened its arms wide to me."

The cost for membership is $85 per month, with unlimited access to the gym.