By Lane Gwinn
the Times

A hankering for hill country 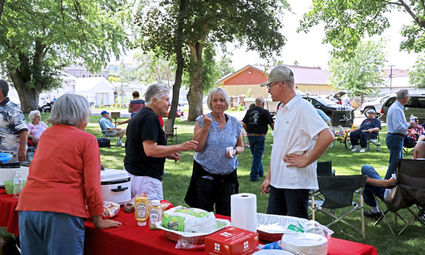 (right, in cap) visits with locals at this year's Patriot's Parade at Preston Park in Waitsburg.

This 4th of July a familiar face showed up at the Patriot's Parade in Waitsburg. Jonne Antilla from Götene, Sweden has been visiting eastern Washington almost every year since his first visit in 2007. His journey started in 1986 as an agriculture student in Sweden when he was given a brochure of various farming, forestry and ranching techniques.

"There was a picture of a wheat field and I noticed right away this is not Sweden. There was a giant hill with combines coming towards you. The header was at a steep angle and the combine was standing straight up and I was so amazed by this picture" Antilla said.

He had been crazy about combines and harvest since he was a kid and this was something special. He kept the photo for years thinking "how amazing it would be to visit the place this picture was taken."

Jonne's interest in farming brought him to Canada for a seven-month agricultural exchange program in 1994. Before going home to Sweden, he and a friend bought a '73 Chevy Impala and took a short trip to the United States where they made a stop at the John Deere museum in Illinois. It was there that Jonne ran across that same hillside farming picture from the brochure; It was in one of the books at the museum and identified the location as Washington State.

It took until 2007 for Jonne to make his way to Washington. His fascination with that photograph of hillside harvesting had him plan his trip for July guessing it would be harvest time in this area.

Driving east from Seattle, he found his way to Walla Walla and the local John Deere dealer, Dan McClure. Having left farming to become a combine technician in Sweden, his interest in combines was very keen. So keen that McClure offered him a job straight away. Jonne explained that he "preferred to test drive these hillside machines" and McClure offered to let him drive one of the machines from his own farm.

According to McClure's wife, Sarah, Dan had spent a year during college working on a farm in Sweden. He was shy, and had to put himself out there and be more outgoing in order to make the most of his time in Sweden.

"It was important to take Jonne around and show him agriculture in our valley as a shout-out to all he learned from the Swedes", according to Sarah.

Dan also advised Jonne "not to be shy; introduce yourself to people. They will be nice, just don't drive your car into the fields because of fire danger."

He took this advice to heart and it has served him well. "One thing leads to another which has been the success of my visits here" claims Jonne.

Now that he was in the area from the photo he was in awe.

" I was so amazed, just driving around, like magic - pure magic. Coming from a country of flat land this is so completely different," Jonne said. 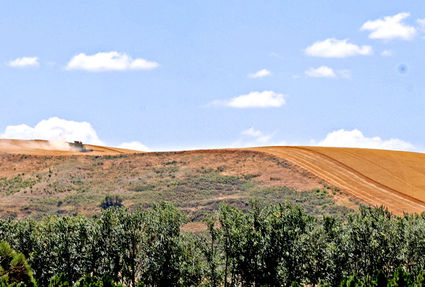 A lone combine harvests wheat on the hills just outside of Prescott last weekend.

Originally, he only hoped to take photographs of the combines at work, and he was delighted to find the local farmers inviting him to ride along. He was also invited to their homes for dinner or to stay. The trip became more about meeting the farmers and went deeper than just photography, Jonne said.

He continued to return for harvest each year from 2007 to 2015 and this area became a second home to him. Unfortunately, he severely injured his back in 2015 and was not able to come back until this year.

It did not take any time for his friends in Waitsburg to make him feel at home again. He seems to find his place easily, making spontaneous plans to visit farms, riding combines and enjoying the friendships he has developed here. All beginning with a photograph of the unique harvest in our hills.