By Dena Martin
THE TIMES

A case of drop foot set her running 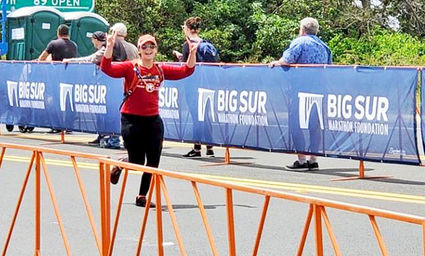 Taelor Carter is exultant as she crosses the finish line of her first marathon in Big Sur, Calif. on April 28. Carter says there are probably more marathons in her future.

CARMEL, Calif-Waitsburg graduate Taelor Carter was on a trip to Maine with friends when she woke up unable to lift her foot. Little did she know then that the frightening experience would ultimately result in her running her first marathon, which she completed on April 28.

Carter said she woke up with a case of drop foot about a year ago. Through physical therapy, and rest, the nerve eventually healed over a three-month period.

"During that time, I thought about all the people that don't have legs or don't have the use of their legs and I was still able to use mine with the assistance of a brace. I pretty much promised myself that when I got better I was going to do something real big, like run a marathon," Carter said.

"I Googled 'most beautiful marathons' and picked one that was fairly close," Carter said.

The run is staged entirely on Highway 1 and runners are treated with panoramic ocean views on their left and a coastal mountain range on the right. The marathon website describes the course as "a challenging course with rolling hills, a steady two-mile climb between miles 10 nd12, and often strong headwinds in certain sections."

A self-described non-runner, Carter said she hated running until she trained with her friend, Felicia Brown, to run a 5k in celebration of Brown's 26th birthday approximately two years ago. She read the book, Born to Run by Christopher McDougall, and said it changed her thoughts about running.

To self-train for the marathon, Carter took three to four short runs a week and a long run on Sunday, following the plan detailed in the book Running Your First Marathon by Olympic runner Andrew Kastor. She said her fiancé, Jace Zuger, was instrumental in her training.

"Jace would make me blueberry and chocolate-chip pancakes before my long runs and he would usually have a bowl of pasta ready for me when I got back. I would map out runs and he would drop me off and pick me up," she said.

Carter said she got a bit of an extra "warm-up" excitement on race day when she thought she had missed the shuttle to the start line.

"When I got on Google Maps to leave for the shuttle it said it was a 30-minute drive to the shuttle and I was going to miss it. I panicked. But then I realized the map was on the walk setting rather than the drive setting," she said, laughing.

Carter said the course was everything she had hoped it would be.

"The course was beautiful, and I couldn't have asked for better weather. I'm told it's the best it's been in years, with no fog. At the halfway point, you cross Bixby Bridge which is like heaven. It's the most beautiful place ever," Carter said.

Carter said her "real" goal was to make it to mile 21 within the allotted time to be spared "the humiliating bus ride to the finish line" required of any participants who hit mile 21 after 11:50 a.m.

"Once I made mile 21 I felt like I had really made my goal. I lost so much energy after that. My legs hurt, my feet hurt. But I kept telling myself 'you already have the shirt that says 26.2 miles, you can't take the bus back,'" she said.

Carter's mother and stepfather, Dan and Trina Cole, were on the sidelines to offer moral support.

"It truly was an incredible experience! For her to complete her first marathon at Big Sur took the perseverance that most may never experience. Words cannot express how extremely proud we are of her," Trina said.

Despite the pain, Carter says there are probably be more marathons in her future.

"I've never been so challenged by myself or had as many arguments with myself as I did in that five hours," she said. "And also, because I can. There are a lot of people who can't do things like that and will never be able to," she said.

When it comes to advice, Carter's is simple.

"Pancakes are a great pre-running meal. Definitely jump on that!" she said.