By Eric Umphrey
THE TIMES 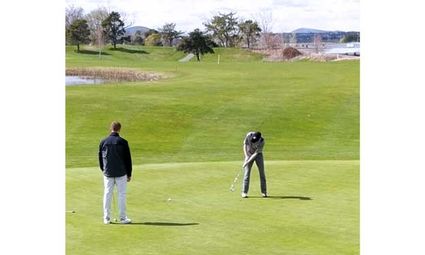 Evan Harvill sinks his eagle putt at the 12th hole at Sun Willows Golf Course in Pasco on April 11.

PASCO – The first 18-hole par 72 course of the year proved to be challenging for the players on DW's golf team. Casey Brooks and Tom Elder participated in their first high school golf matches this past Thursday on April 11 at Sun Willows, in Pasco.

The day, however, belonged to Evan Harvill of Burbank who shot a two over 74. He finished the day first overall by six strokes with one eagle and three birdies. The eagle was on the 12th hole, a 325- yard par 4. Evan reached the green off the tee pin high and would sink his 5-foot putt. Since Burbank does not have a high school golf team, they...