Son of Joe Patrick, of Waitsburg, made his own patriotic journey in 2013 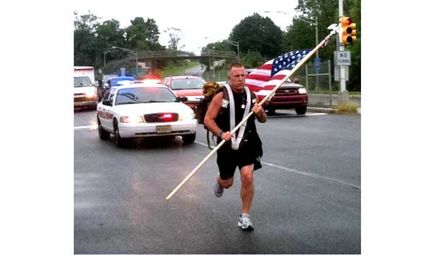 Joe "Tiger" Patrick carries the U.S. flag during his cross-country walk in 2013

Joe "Tiger" Patrick II, son of Waitsburg's Joe Patrick, made a similar cross-country journey in 2013 when he walked across America to honor the fallen heroes of the Afghanistan and Iraq wars.

Patrick began his journey at Imperial Beach, the southernmost point in America and made his way to Arlington Cemetery in Virginia. He carried a 25'x 8' memorial panel containing pictures of the 6,654 men and women who were lost in the Iraq and Afghanistan wars. More would die after his journey began.

Patrick made his first patriotic walk for the 10-year anniversary attacks of 9/11 when he walked from...