By Michele Smith and Dena Martin
The Times 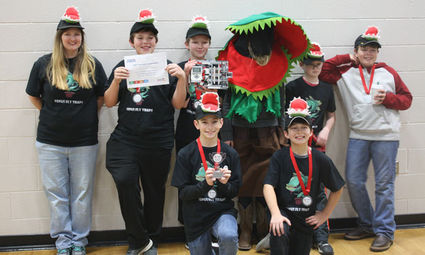 DAYTON – First-year 4-H Robotics Coach Jeanne Walter is pretty proud of her group, and rightfully so! The group of seven kids, age 10-13, from both Dayton and Waitsburg, recently won the Research Award for their project at the First Lego League Regional Tournament in Pasco and will advance to the state competition in Cheney on January 13.

The club, named the Venus Flytraps, includes Mikel Vance, Vaughn Walter, Juniper Kerr, Balian Walter, Phinneas Kerr, Hudson Reser and Joshua Reser. Of the 25 teams competing in the Pasco regionals, only six moved on to the Eastern State Championship. Of the 30 teams to compete at State, just one will advance to the World FIRST Lego League Championship in Houston, in April.

"FIRST Lego League is a fantastic organization that helps to inspire students to achieve in STEM careers by exposing them to real-world problems and having them work out and build solutions. This year's problem is Hydro Dynamics. The teams must find a real-world problem with human water issues and then find a solution or improve the conditions that are currently occurring," Walter said.

The Venus Flytraps visited the Walla Walla Homeless Encampment to learn about homeless water issues. There, they learned that that the one source of water is an open faucet with no drainage or privacy and that there is no hot water available.

In response, club members donated a hot water heater, bottled water, food, and hand and foot warmers to the encampment.

"We asked what people needed and were told they needed hot water for cup-of-soups, noodles, and other warm dishes. The boys had raised funds by collecting yellow starthistle bugs all summer. It was hot, pointy work. They were thankful to get the contract from the Columbia County Weed Board as robotics is an expensive club," Walter said.

The group also investigated local problems with water pollution and decided to address the issue of nitrate pollution in local waterways as their project. 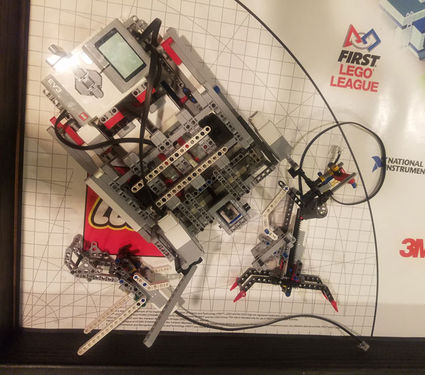 The winning robot designed and created by The Venus Flytraps.

"On average, farmers spread 133.5 pounds of nitrogen fertilizer per acre on row crops. Out of this amount, it is estimated that 50-70% is not taken up by the plants. That may lead to a lot of nitrate in the water," Walter said.

As their project the team built a floating barley container and worked to genetically modify barley to absorb more nitrate out of standing water. They then created a movie to present their problem and solution and built a robot, programming it to complete tasks associated with water issues.

Walter said the tasks were completed with members learning core values such as teamwork, gracious professionalism, and cooperation.

"I am very proud of these team members overcoming their individual challenges to pull together under stressful conditions and accomplishing great things. Their research project is very advanced and their award at the regional level and advancement to State shows how much they have accomplished," Walter said.