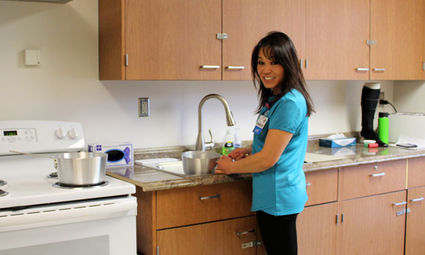 Rebekah Gustin's patients can practice cooking and washing up skills in the new occupational therapy department kitchen. Gustin said the wafting smell from brownies baking is a favorite with the staff.

DAYTON-Patients stand to benefit from the addition of three new treatment modalities at Dayton General Hospital, as well as from the enthusiasm of the staff responsible for them.

Treatment with acupuncture has been added to the list of services at DGH.

Denise Lane has been utilizing her education, from the Oregon College of Oriental Medicine in Portland, Ore., and her experience to give patients another option in treating chronic pain, stress, anxiety and depression.

An acupuncturist places fine, sterile needles at specific points on the body to activate the body's Qi (vital energy) to promote natural healing by enhancing recuperative power, immunity, and physical and emotional health.

Acupuncture, which is 5,000 years old, is not in the realm of "hocus pocus", Lane said.

According to the National Institute of Health, "There is sufficient evident of acupuncture's value to expand its use into conventional medicine."

She said functional Magnetic Resonance Studies have shown changes in the brain when specific points on the body are stimulated. Animals also respond to acupuncture, debunking the placebo effect explanation for its effectiveness on humans.

"Studies are getting better and better," she said.

Lane said she sees patients usually after they have exhausted other treatment options.

"I have had people with chronic ongoing pain respond after one treatment," Lane said.

Six treatments is the average and periodic tune-ups are sometimes needed, she said.

For the treatment of depression, anxiety and PTSD, the goal is to switch off the flight or fight response with acupuncture. This can achieve a mild feeling of euphoria, or what Lane refers to as "Aculand,"

One patient told her, "I don't understand it, it seems like I'm smiling out the back of my head."

Acupuncture is a safe, painless, method of treatment, and can be used to treat opiate, and other drug and alcohol addiction, as well, Lane said.

Lane said she also treats students with sports injuries and other chronic issues.

An additional treatment called "cupping" is sometimes used by Lane.

Lane said she can stimulate the flow of blood and Qi, within the superficial muscle layers, through the placement of glass cups over the affected area. Cupping is a treatment for sore muscles, tension, neck pain, and even the common cold, Lane said.

Treatments last about an hour and most insurance plans cover them. Patients can usually self-refer, Lane said.

Stephanie Painton is a certified speech and language pathologist with forty years of experience, who has been at DGH since January 24, 2016.

Painton is especially proud of the work she does for patients with feeding and swallowing disorders due to surgery disabilities, head injury, heart failure, stroke, and chronic obstructive pulmonary disease.

Evaluation is performed with a fiberoptic endoscope, using a device called Vital StimPlus, which allows Painton to check symmetry in the nasopharynx and check the function of the soft palate and vocal cords.

"This is the gold standard, in my opinion, of treatment," Painton said.

Painton also sees children for speech and language delays, lisps, and voice and speaking disorders. She said she has seen several local children whose hearing is fine, but who have auditory processing disorders.

"Kids don't get information in a typical way and that causes behavior problems and misdiagnoses," she explained.

Painton will refer them to an audiologist for definitive diagnosis. Treatment consists of providing a listening environment that allows them to receive auditory information "in the best way, for them," she said.

"With intensive therapy, patients with stuttering and cluttering issues, do well," she added.

Painton received her graduate degree in Speech and Language Pathology from the University of Arkansas Medical Sciences.

She said she has never wanted to do anything else.

"I knew exactly what I wanted to do. I've been fortunate to be a young stupid kid, that made a good decision," she said.

Gustin was working at Walla Walla General Hospital when it closed in May, 2017. For fifteen years before that, she worked at Providence St. Mary's Hospital. 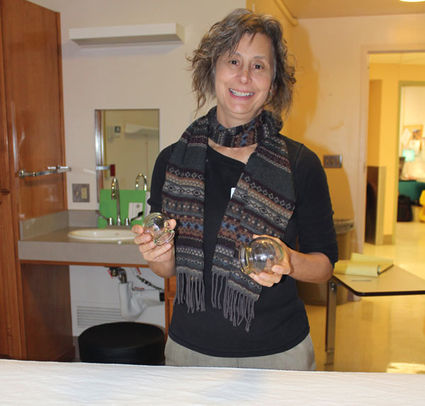 Acupuncture therapy has been added to the services offered at DGH. Here, Denise Lane gets ready for her next patient.

She said at Dayton, she is working more with an older segment of the population, helping them regain function after debilitation from stoke or from surgery.

"The goal is to always get them back to their home," Gustin said.

Gustin said an important part of successful rehabilitation is making sure there is a safe home environment for patients to return to.

Some of the therapy provided in the occupational therapy department is working with patients on how to follow instructions and helping them with fine motor skills such as handwriting or buttoning buttons.

Gustin also provides therapy for patients with generalized lymphedema and she will provide family support for patient treatment in the home setting.

Gustin is a graduate of Loma Linda University in California. She has been working at Dayton General Hospital since August.