Bob Brock says the journey to honor veterans will continue 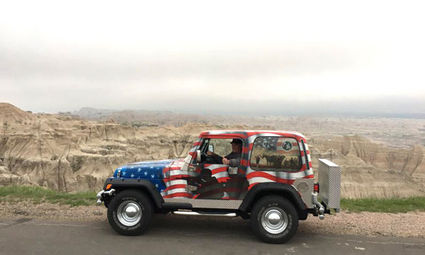 Bob Brock and his Patriot Jeep "taming the Badlands of South Dakota."Brock said the flags had to be removed due to the highly unpredictable weather.

WAITSBURG – Bob Brock met his goal of driving his Patriot Jeep in the Washington D.C. Memorial Day Parade, but says "the journey is not over." Brock, who recently returned from his cross-country quest, gave a presentation in Preston Park on Saturday and shared about his experience.

He said he and the Jeep, which he has come to regard as having a voice of its own, made it through many adventures and terrains. They survived a tornado in Indiana, crossed the desolate Dakota badlands, gave three live television interviews, and successfully navigated Washington D.C.

All along the way, they greeted and encouraged the veterans and citizens that make this country what it is. Brock, who wears a Vietnam veteran hat, said he and fellow veterans shared story after story, "and we all walked away feeling better."

Brock shared several standout interactions with the small group of listeners who showed up at the park to share vicariously in his experience. Brock said he has the idea "rolling around in his head" that he might write a book about the experience, in the voice of the Patriot Jeep.

Brock said touring Washington D.C. was almost overwhelming. He and his wife, Jaque, spent five days there "and still didn't see it all." Bob said he has 27 friends with their names on the Vietnam Memorial Wall.

Bob was especially close with his friend and riding partner Gary Worrell. He said he served as Gary's pallbearer when Gary's body was returned from the war, just before Bob himself left for duty. A friend had arranged for Bob to find Gary's name on the wall, and Bob was able to leave a tribute.

"It was a very moving experience, as it should be," Brock said.

Brock visited the new African American History and Culture Museum and said he was "swooped up and welcomed by the black Vietnam veterans that were there." 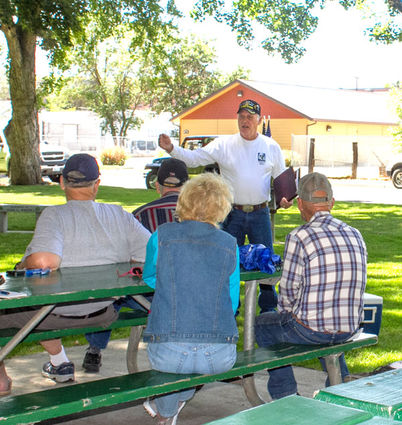 Brock shared stories of his journey in Preston Park on Saturday afternoon.

"I never saw color when I served. There was an immediate sense of brotherhood and tremendous bonding," he said.

Brock said the highlight of the experience easily was meeting all the truck drivers, tourists and veterans who stopped to take photos with the jeep and to show appreciation for those who served their country.

"I had the experience I hoped to have, meeting great people from all across the country. Patriot Jeep represents what I feel in my heart for this country. And that journey is not over," Brock said.

Brock showed off the Patriot Jeep at All Wheels Weekend in Dayton last weekend, has plans to visit veterans in Yakima, and will return to his hometown of Placerville, Calif. in the fall.