Around the Valley: with Karen Huwe 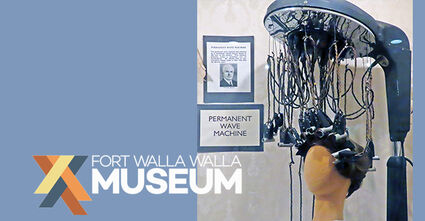 A turn of the century permanent wave machine on display.

WALLA WALLA-The first fort was established in 1856 and was home to dragoon, infantry, artillery, and cavalry units until 1910. The museum occupies 15 acres and opened in 1968.  The entrance building opened in 2010.

Upon arrival at the entrance building, we stopped at the General Store to purchase our tickets and proceeded on a self-guided tour of the hall and its three galleries.

The hall has bronzes by Walla Walla native David Manual, a historic stagecoach, and other exhibits.

In the three galleries, there is an abundance of history. In the rotating special exhibit gallery, you can re...