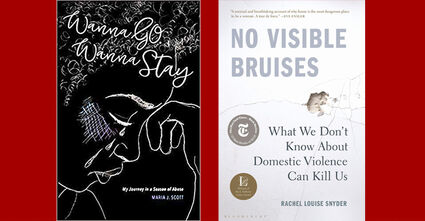 Two books the YWCA Walla Walla has invited the public to read and share at hosted discussions and soup suppers in October.

WALLA WALLA-The YWCA Walla Walla invites the community to read two books this month for Domestic Violence Action Month (DVAM) and then meet for discussions and soup suppers at the YWCA Reception Room.

The first selection is "No Visible Bruises: What We Don't Know About Domestic Violence Can Kill Us." Written by journalist Rachel Louise Snyder and published in 2019, "No Visible Bruises" uses personal accounts to shed light on the complex problem of domestic violence.

"The humanity of each person she interviewed comes through," said Executive Director Anne-Marie Schwerin, "from survivors, advocates, and prosecutors – as well as the perpetrators of violence."

While at times quite wrenching, the book is hopeful about solutions to violence. The book has won numerous awards and made several publishers' "Best of 2019" lists.

A second, shorter option (roughly three-quarters the size of No Visible Bruises) published in 2018 is "Wanna Go, Wanna Stay: My Journey in a Season of Abuse." Set in early 1970s Atlanta, Maria Scott tells her own story of meeting the charismatic Mark as a young professional woman. Kirkus Reviews called "Wanna Go, Wanna Stay" a "frank remembrance that tells of how the author found the strength to free herself from a dangerous situation."

The following Monday, October 24, a discussion of "Wanna Go, Wanna Stay" will take place in the Reception Room at the YWCA Walla Walla at 6 p.m. YWCA Advocate and Campus-based Advocate Malia Lewis will lead the discussion.

A meeting to discuss "No Visible Bruises," led by YWCA LiNC Director, Andraya Anderson, will take place on Wednesday, October 26, at 6 p.m., also at YWCA Walla Walla. This is an opportunity to meet one of the newest YWCA staff members and learn more about Living in New Circumstances, LiNC, and the life skills and confidence-building program for domestic violence survivors.

Limited copies of "No Visible Bruises" are available on loan from the Rural Library District and the City of Walla Walla Public Library. Kindle versions, audiobooks, and paperback copies of either title can be ordered online and at local booksellers.

There is no charge, but participants are asked to sign up using the form at ywcaww.org/DVAM to ensure there will be supper for everyone. The website provides information about other DVAM activities, such as the Taking Steps Against Domestic Violence walk on October 19. Call 509-525-2570 if you have questions.

About the YWCA: YWCA Walla Walla's mission is eliminating racism, empowering women, and promoting peace, justice, freedom, and dignity for all. A signature program is the Domestic Violence and Sexual Assault Resource Center: a domestic violence shelter, counseling, support groups, advocacy, and information. In addition, the YWCA offers a licensed preschool and childcare center and a number of community and personal enrichment programs.