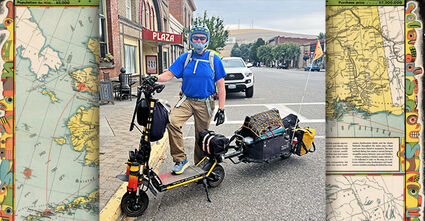 WAITSBURG-Richard Harbuz is an overlander explorer making his way on an electric scooter. He has ridden the well-outfitted scooter from his home in Colorado across Canada to Alaska. And back again, finding his way to Ten Ton Coffee in Waitsburg.

As a self-described overlander, Harbuz enjoyed taking his bike and riding long distances from his home. After suffering a back injury while working in his daughter's home, he found it difficult to ride his bike. He missed being able to take off on his own power to explore and discovered electric scooters, which allowed him to stand and ride.