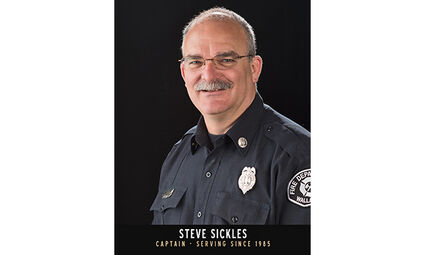 Steven Duane Sickles passed away peacefully in his sleep at 12:34 a.m. on July 7, 2022. He was surrounded by family after battling a rare disease called Multiple System Atrophy (MSA). This disease took him away from all of us way too soon!

Steve was born October 13, 1963, to Robert and Velma Sickles in Walla Walla, WA. He grew up in Waitsburg and attended Waitsburg Schools all the way through high school, graduating in 1982. He was the youngest of 4 children. Steve was involved in year-round sports during his high school years. He played football, and basketball and ran track every year. He loved being outdoors always. He was very involved in Boy Scouts. He was 17 years of age when he earned his Eagle Scout Badge, which became extra special when he was able to be pinned by his father, Bob Sickles, who was the Scout Master in 1980. He also attended the Boy Scout Jamboree at Fort A.P. Hills in Virginia the same year. His Eagle Scout project was to turn a little abandoned lot near the pool into a park in Waitsburg.

Steve followed in his father's footsteps by becoming a Boy Scout Leader for his sons, Kyle and Michael. Steve also followed his father's lead in becoming a member of the Masons of Walla Walla in 1993 until his passing. He was also an active member of the First Christian Church in Waitsburg in his younger years until later, when he began attending the Nazarene Church in Walla Walla.

Steve loved to stay busy. His first job was mowing neighbor's lawns in Waitsburg as well as at the trailer park his parents owned. Picking cucumbers and strawberries for his parents and growing pumpkins to sell were also among his first jobs. He began working during the summers at the Green Giant Cannery in Waitsburg beginning at age 16 until he moved to be at college in 1983.

Steve graduated from Spokane Community College with a Fire Science Degree in March of 1984. This was not a huge surprise to many, as Steve dreamed of becoming a Fireman from the young age of about four or five. At that young age, Steve would ride his bike to any fire he could get to just to watch the guys at work. He even chased the engine several times on his bike. As he began to search for a permanent Fire Dept position, Steve volunteered at the Waitsburg Fire Department from 1982-1985. He also worked at Nelson Irrigation in 1984 for six months and as a janitor for the Waitsburg School District at the same time. He was at the School District until August 20, 1985. He remembers painting the entire middle school. His life-long dream came true on August 20, 1985, when he was hired by the Walla Walla City Fire Department. He began his career as a Firefighter/EMT. He was promoted to driver/engineer in 1996. He was again promoted to being a lieutenant in 2000 and ended up meeting his goal as a Shift Captain in 2005. Unfortunately, Steve had to end his career abruptly and early February 1, 2018, as a result of the symptoms of MSA. Steve truly loved getting up every day to go to work. He Loved his job and was happy to be doing what he had always dreamed of. He was very respected within the Fire Department.

Besides loving the Fire Dept, Steve loved his family and being outdoors! His hobbies included fishing, hunting, camping, hiking, rafting, kayaking, canoeing, snowmobiling, yard work, gardening (vegetables or flowers), cooking, freezing, canning, making homemade kombucha, yogurt, pickles & jam. He loved to work with wood and made several pieces, including the beautiful kitchen table in our dining room. He loved to camp with both his Fire Fighter Family as well as his own family. One of his favorite memories is of he and his brother-in-law, Jeff, taking a canoe out on Wallowa Lake to do some fishing. We may never know the full story (as each says the other did it), but somehow on that particular day they tipped the canoe. Steve said he had never seen anyone put a life vest on as quickly as Jeff did that day!! He always laughed while telling others of that memory. He loved spending time with Jeff & loved his company always.

Wallowa Lake was a special place to Steve. He began taking family summer vacations there every year beginning in 1985 until he could no longer go camping the summer of 2020. It was always a huge family affair, as everyone would go from both sides of our families and spend a week of just being together. He especially enjoyed Wallowa Lake when he was able to be there with his only grandson, Konner. Konner was his little Buddy. Well.... Konner & Gizmo, our Shih-tzu. He loved spending time with family whether it was just visiting, playing games, or going to a family member's sports event. Being with family and out in nature brought him the most joy.

During the last year or two of working at the Fire Department, Steve began helping his father-in-law, Harley Stafford, in doing backflow testing for the City of Walla Walla. He continued that job for several years with the help of most of the kids and Carolyn, at some point or another, until it became too difficult for him.

Steve and his wife Carolyn loved to travel and took several cruises, some with their parents, kids, and other family members, mostly alone to many different countries. They travelled to Jamaica, Barbados, Mexico, Italy, Spain, Honduras, Antigua, The Virgin Islands, Alaska, Canada and much of the Caribbean. They also took a trip not long after Steve retired, in their motorhome around most of the United States.

They met at the Nazarene Church in Walla Walla in 1989 and became friends then. Carolyn moved away for several years to Las Vegas. They began to talk, about 5 years after she moved, and began to get reacquainted again. They talked over the phone for 12 months when Carolyn was finally able to move back to Walla Walla where her family was. Steve and Carolyn were married on July 20, 2003. They had known each other 34 years. They spent their 19 years of marriage as best friends! They began to attend Life Church after being married.

The year after Steve and Carolyn were married, Steve was chosen to receive a ride in the Walla Walla City Sponsored Hot Air Balloon. That Balloon did not have a crew that year. Steve asked if he could give his ride to Carolyn, but it needed to be a city employee. Steve and Carolyn offered to crew for Mike Layman's Balloon that year and ended up both going up in the basket together. They continued to crew for Mike for 10 years along with most of their children, and even Carolyn's parents, all of whom rode at one point or another.

Steve was proceeded in death by his father, Robert (Bob) Sickles and his mother, Velma A. Sickles. He leaves behind his wife, Carolyn Sickles, his children, Kyle Sickles (son) of Seattle, Michael (Rachael) Hubsky (son) of Las Vegas, Sasha Sickles (daughter) of Custer, Washington & Konner Holtcamp (grandson), Shelby Hubsky (daughter) of Spokane, Cassidy Hubsky (daughter) of Belview and Amber Hubsky (daughter) of Walla Walla, his siblings, brother Ed (Heide) Sickles of Seattle, sister Sherrie (David) Morris of Waitsburg and sister Dawn (Jeff) Nichols of Waitsburg. He had many nieces & nephews, many cousins, aunts and uncles, all of whom he was very fond of. He found great comfort in each of their visits as his body began to fail him. He is grateful to each and every person who touched him, encouraged him, helped at the house in one way or another and the many who came to sit with him and visit. We are all very Grateful!! Steve's Memorial Service will be held at Life Church in Walla Walla, WA at 11:00 a.m. on Sat July 30th. Any donations may be made to the Walla Walla Professional Fire Fighters Benevolent Fund.