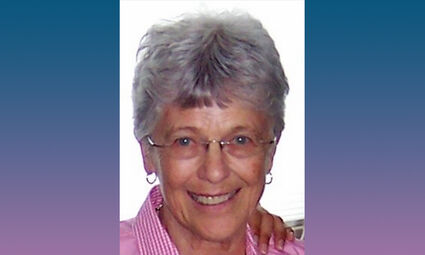 Joan S. Fiala was born May 7, 1923, in Centerville, Washington, to Walter Thomas Hamilton and Ida Anne (Hinshaw) Hamilton. She received her eternal promotion on June 23, 2022, in the early morning hours at Parkview in Wheatland Village, Walla Walla, Wash., having completed 99 years, one month, and 16 days on this Earth. She was in good health until near the very end of her life and passed peacefully of natural causes after her children bid her farewell, at which time her son, James, blessed her by singing a song he had written as daughter, Julie, held her hand.

Joan always spoke of the privilege of having been raised by a village in Waitsburg, Wash., where her parents were entrepreneurial merchants, owning numerous businesses through the years, the last being Hamilton's Electric. She was an only child who learned her affable social skills at her parents' feet in the store beginning when she was very young. She attended elementary through high school in Waitsburg, WA, and continued her education at Washington State College (WSU) in Pullman, WA. While at WSC, she studied Home Economics, was a member of the Kappa Delta sorority, and was chosen Harvest Ball Queen. She was stricken with spinal meningitis and had to leave her studies to return home to recover.

On May 30, 1943, Joan married James A. Stonecipher, also from the Waitsburg area. World War II kept the newlyweds apart for three years while Jim fought with the army in Europe and Joan worked at her parent's store. When the war ended, they were joyfully reunited.

The couple spent the next many years raising their family and farming acreage in Spring Valley in an extended family operation including several properties. During harvest, Joan and her helper cooked up three scrumptious, hardy meals a day for her family and a good-sized crew. She was artful and creative in everything she did, giving astute attention to detail and always striving for excellence.

She was a dedicated partner with Jim in all that they undertook. They were both members of the First Christian Church in Waitsburg, WA, where Joan taught Sunday school to six-year-old children for 16 years, desiring that they receive the same underpinnings of faith that her children received at home while Jim served as Sunday School Superintendent. She was a member of the church Dorcas Society and DeNova Club, a women's community service group.

Over the years, Jim and Joan enjoyed annual family vacations to Priest Lake, Idaho. They took the family on an extensive tour of the western United States in 1960 and to the World's Fair in Seattle, Wash., in 1962. The couple went on many fishing trips with friends and numerous trips to Hawaii. They sojourned to Australia and Europe and cruised the inside passage to Alaska. During Jim's two terms as Walla Walla County Commissioner and tenure as the head of the Washington State Association of Counties, Joan traveled with Jim to every county in the state and often to Olympia. Their 38-year marriage ended on November 7, 1981, when Jim passed away.

Nearly a year later, after mutual friends spent their days playing Cupid between the two, Joan married Joseph (Joe) B. Fiala II on Oct. 2, 1982. His wife had passed only two days after Jim. Joan and Jim and Joe and his wife, Jane, had been dear college friends who often double-dated. The two soon came into agreement with their friends' vision of their future. Joan and Joe were married in Visalia, CA. There she became a member of Grace Lutheran Church, enjoyed becoming acquainted with her new family and community, and experienced the joy of swimming in her own pool every day. When Joe retired, they moved to Flathead Lake in Montana, wintering in Hawaii. In Montana, Joe and Joan were active in Trinity Lutheran Church in Kalispell. They participated in a computer club and enjoyed relationships with many friends and neighbors. It was their joy, as well, to receive numerous dear ones from afar who came to visit. Joan felt so blessed to add Joe's four children, seven grandchildren and five great grandchildren to her tribe. The couple enjoyed 33 years of marriage before Joe passed on December 17, 2014.

Joan returned to Walla Walla, WA and has spent the last eight years enjoying her family of three generations and reconnecting with old friends. Two weeks before she passed, she said to her daughter, Julie, "I've said everything I have to say." Her mission was complete. She "fought the good fight... finished the race...kept the faith..." (2 Timothy 4:7)

Joan loved and served God, her family, and her friends and neighbors. She liked to work hard and bless others. Her love of swimming was unparalleled, and she was passionate about designing scrapbooks and making photo albums. She was the family historian. This writing will be the final entry to the records kept, and a testament to a life well lived.

A small, private, family graveside service will be held at a later date.

Memorial contributions will be gratefully accepted by YOUTH ADVENTURES @ yeehawaloha.com, or checks may be sent by mail to Yeehaw Aloha, a nonprofit corporation, 1439 East Isaacs Ave., Walla Walla, WA 99362.