By Justin Jaech and Lane Gwinn
The Times

Commissioners vote 2-1 against two grants and restrict further steps until an advisory vote is held. 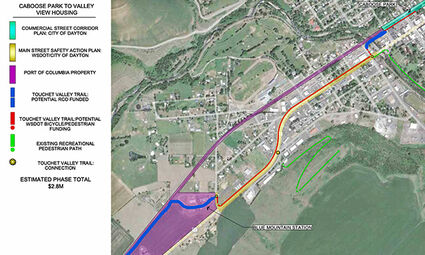 Map showing the two areas that had been proposed as the project boundary for an RCO grant. The lines in blue are the specific part of the proposed Tuchet Valley Trail that would have been under the requirements of the grant.

DAYTON – Actions taken by the Port Commisioners at the April 13, meeting may have ended years of work on the Touchet Valley Trail Project. The meeting at the Columbia County Fairgrounds Youth Building was standing room only and well attended on Zoom.

Concerns from those against the project included fear of the trail attracting the homeless, liability from pesticide spraying, and private property issues. Some speakers would like the money from the trail to be spent on fixing streets, buildings, and putting in a new pool.

Support for the trail included health benefits and safety issues for bikers and pedestrians on Highway 12, and economic development benefits.

There was considerable emotion from many who attended, regardless of their position.

After closing comments, the Chair Genie Crowe returned to routine business matters. Commissioners approved minutes, the budget report, and the purchase of electronic WiFi-only tablets for use by the commissioners-the purchase not to exceed five hundred dollars.

Director Dickinson gave the assets report starting with the Rock Hill Industrial Park. There will be a workday spearheaded by the Blue's Crew to widen the Rock Hill trail on May 1, 2022, at 1 p.m. She encouraged anyone interested in volunteering to contact the port office.

At Blue Mountain Station, the soil test for arsenic showed the level well within standards. Council Member Bryant requested a tour of BMS, and it was scheduled for the Commissioners to visit the BMS businesses at 4 p.m., April 27, 2022. This would be a workshop meeting, and no decisions or voting are to occur.

Director Dickinson, Brian Hansen and Adam Schmidtgall from Anderson Perry, and Ken Van Voorhis from SPVV, Landscape Architects, gave an update on the trail. The commissioners were given the opportunity to ask questions about the proposal or the grant applications before the evening's vote.

Hansen presented the current trail costs and estimates. He explained the four phases developed by the steering committee for constructing the trail.

Van Voorhis said he works on trails and parks as a consultant. Part of this work is helping to process and apply for Recreation and Conservation Office (RCO) grants. He said RCO grant applications are accepted every other year, and the port can apply this year. These grants can be used for various recreational development, including splash pads, pools, parks, and trails.

He reminded the commissioners that specific development funded with an RCO grant must be kept as a public recreation area in perpetuity. This is the same requirement for the marina at Lyon's Ferry, which received RCO funding.

Schmidtgall told the commissioners that funds from the WSDOT grant could only be used for pedestrian and bicycle programs. The port would be asking for $600,000, which could be used towards the match for the RCO grant. Since this is under $800,000, there is no matching funds requirement for the WSDOT grant.

The RCO and WSDOT have assigned grant managers to the project to ensure the applications are complete, appropriate, and meet the requirements for funding.

The only question from the commissioners was from Watts, who asked if the plan was still the 30% design, from last April, with modifications.

Hansen said there were no printed drawings yet for the 60/90% design due to the changes moving the trail off Commercial Street.

Watts asked if there was anticipation for the 60/90% to be completed.

Dickinson answered that if they approved the route change through downtown Dayton, the 60/90% plans would be quickly completed since the route would be decided.

Several comments were about having an advisory vote before continuing the project.

Crowe read a list of about seventy names of those who wrote or emailed the commissioners, with the majority expressing support for the trail.

The chair closed public comment period and the commissioners gave statements before the resolutions were brought up for a vote.

Commissioner Bryan said he read through the two grants and wanted to cover four subjects of concern: maintenance, property rights, public input, and the grants.

First, he said the estimated maintenance costs seemed too low. They did not take into consideration expenses for cleaning bathrooms, snow removal, vandalism, homeless, or flood damage. He specifically felt the issue of cleaning the bathrooms had not been covered in the maintenance plan.

His concerns over property rights, included right to farm issues, and spraying. He also asked who would put the signs up when there is spraying, would it be a new employee? He felt it was an example of unanswered questions.

Bryan said after looking at the civil drawings, he did not believe the port owned the complete right of way. He said he saw names of other property owners in the right of way on that document.

Anderson Perry consultants told The Times they are confident that the port does own the right of way. The civil drawings Bryant was the incomplete map used in the 30% design while the property searches were still being completed. Since then, there has been a full title search, reviewing of hundreds of documents by the title company and Anderson Perry, who are confident of its accuracy.

Regarding public input, Bryan felt there was not enough public outreach and spoke in favor of an advisory ballot.

Next, he said there would not be significant benefit from the trail since it was not connected to a larger trail. He also said it would not provide any real safety benefit, and there are already 200 miles of trail in the area to provide healthy recreation.

Regarding economic benefits Bryan said, "This trail doesn't create living-wage jobs. It just doesn't. Possible food service jobs, or convenience stores, or maybe a bicycle shop, or, you know, a few jobs but even the economic indicators that we were given in the presentation, the jobs that it's talking about doing are between 25,000 and 35,000 dollars, so they're down in the poverty level. So, we're not talking about this is going to be a great boon and create all these jobs for all these people for nine-point seven miles of trail."

He spent most of his statement discussing his interpretation of the grants.

Bryan said the chances of getting the WSDOT grant was unlikely since the amount the port is asking for does not require a match. However, this is not stated in the grant manual, or apparent in the past distributions.

With the new route through downtown partly on WSDOT land, the commissioner said, 'it opens a whole new can of worms.'

Hansen and Schmidtgall told The Times that the WSDOT grant manager had been involved with the change of route and was encouraged about moving forward.

Another issue concerning Bryan was the requirement that any WSDOT projects receiving federal funding must be on the State Transportation Improvement Plan (STIP). Since the project may apply for a federally funded RCO grant, it would have to be added to the STIP. He said the Touchet Valley Trail was not listed on the STIP.

According to the WSDOT website, only projects that have been awarded a grant is listed on the STIP. It states that funding is available for disbursement after a project is included on the plan.

Next, Bryan listed his concerns about the RCO and Water and Conservation Fund grant.

He repeatedly worried about the requirement for perpetual obligation for any development funded by RCO. He also did not think the trail fit the qualification of standing on its own merits as a recreational use.

The final area of concern about the RCO grant was his interpretation of the project boundary requirements. He said the entire trail was within the project boundary, including the railroad operator, Caboose Park, Waitsburg Park, Blue Mountain Station, the Depot, and the Smith House, and must forever remain for recreational use only.

The grant manager from the RCO replied to The Times in an email, stating that the RCO requires grant recipients to establish the project area by creating a boundary map. Anything within the boundary must remain recreation forever unless it is replaced by other recreation property by the recipient.

The important part of the RCO reply states that it is only the specific RCO funded development that would be affected by the strict requirements. In this proposal, the two areas are the pedestrian bridge crossing the Touchet River in Dayton and an area at Blue Mountain Station. These would have to remain recreation unless converted. It does not mean that the rest of the trail, the railroad, or any other locations Bryan mentioned are affected.

RCO grant manager said the railroad would not have to stop operating. The port would just need to have control and tenure over the railway, which it does. It does not need to shut down the railroad operator or activity.

Watts said he spoke to "thousands" of people about the trail and said some would "not speak up because of retribution. He also said, "we got Ukraine, Russia, we need all the grain we can get, so I don't want to take one inch of that farmland for that very reason."

Crowe said she trusted the experts who have assessed all the right of ways.

The Commissioners were to consider resolutions #2022-01 and 2022-02, allowing the Port to proceed with the grant applications for the trail. Bryan moved to deny both resolutions, both times seconded by Watts. Both resolutions were denied, with Bryan and Watts voting to deny and Crowe voting to approve.

Regarding the proposed advisory vote, Dickinson said the Port does not have the authority to put such a measure before the voters; however, both the County and City may do so.

Bryan moved that the Port take "no further action funding on the trail until we have gained a clear and obvious majority opinion that the community is for the trail."

Watts seconded the motion. Crowe asked if an advisory vote was held, and a majority said they wanted the trail, would they abide by that? Bryan said, "I imagine we'll cross that bridge when we get there." Bryan's earlier motion to take no further action until the community's desires were determined passed by a 3-0 vote.

The meeting adjourned for a five-minute break. Afterward, Dickinson updated the Commissioners on the broadband project, most significantly that supply chain issues were inflating the price of the required fiber optic line. The Commissioners authorized the Director to buy fiber piecemeal to get the best price, including excess from other Port projects and companies.

The Port Commission then went into an executive session with no action following the session. The next regular Port meeting is scheduled for 5 p.m., May 11, 2022.