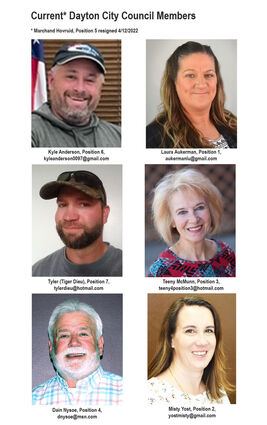 The Chamber of Commerce Director, Belinda Larsen, announced their awards presentations would be held on April 20, 2022, and they are working on the Dayton Days and All Wheels Weekend events. The Chamber is discussing parade routes with the County.

The City Council discussed authorizing the mayor to enter a Purchase Letter of Intent with Northwest Development, LLC for a vacant lot on the corner of North First Street and Commercial Street. This city-owned lot is behind Dingles and serves as a gravel parking lot. The sales price listed in the letter is $65,000, about two dollars a square foot.

Council Member Misty Yost said she thought the offer was a "slap in the face," as the offer was several times less per square foot than recent vacant lot sales in Dayton. Yost said the improved corner, with the statue and benches, alone assessed for $150,000.

Council Member Aukerman asked, "Why would we want to sell it, regardless of the cost?" Weatherford said one reason is so the lot would return to the City's tax roll.

The representative from the development firm said a national tenant wanted to build a 12,000 to14,000 square foot building with parking and "create some jobs."

Aukerman then made a motion to deny the sale of the lot. Council Member Hovrud seconded the motion.

Council Member Nysoe said, "I think this is the wrong move. The message we are sending to other businesses anywhere who are considering coming to Dayton is that we don't want any more business in Dayton. That's a bad, bad, economic position that the City Council is being asked to ignore. We had this proposal before us last year for the same price, and we had asked Northwest Development, LLC, to pay for an appraisal. Our previous planner left about that time, and the whole issue fell apart."

Nysoe said that if the land was undervalued, the City should counter their offer.

"We are saying we don't want growth; we don't want new people coming to Dayton, and that's been demonstrated over and over again," said Nysoe.

Nysoe asked, "Then why not counter."

The NW Development representative said they were more than willing to look at appraisals and negotiate the price. But if told no without any counter, they would go away and they not come back.

He said the business looking at locating on the lot is a Dollar Tree/Family Dollar store, a small grocery store that would sell some of the same items as Walmart.

Aukerman rescinded her motion and moved discussions with the development company to be opened.

The Council passed a motion that would open negotiations with NW Development but require them to return with an appraisal.

The Council next voted on resolution #1490, authorizing the mayor to execute an interlocal cooperative agreement with Columbia County for temporary planning department services. Columbia County often handles minor planning issues, while the contract with AHDL is to cover more complex, larger planning jobs. The Council approved this resolution.

The council was asked to authorize resolution #1489, authorizing the mayor to complete the land purchase agreement with Bryan Martin and Pat and Rhonda Barker to acquire land for the sewage treatment drain field. The mayor remarked that this item was the reason for a lengthy executive session special council meeting last week. Since that meeting, a conditional land use agreement has been issued for the use of that property.

Dayton has been working with the Department of Ecology for years. The City's treatment plant can no longer release the effluent into the Touchet River from May to October as it does not meet standards. Since 2007, the City has been exploring options but has not found a workable solution. In 2019, Dayton was approached by the Washington Water Trust and the Umatilla Tribe to explore an innovative option that would remove pollutants but still replenish the water in the Touchet Valley and Columbia Basin. After mechanical cleaning by a new treatment plant, the wastewater infiltrates through the ground and back to the Touchet River as clean water.

Washington Water Trust provided funding for a feasibility study to identify suitable parcels of land. The study identified the two parcels identified in resolution #1489 as the best location for maximizing water return to the river. After many engineering studies, these properties were identified as suitable. Dayton has invested about $200,000 to research the suitability of these properties. The properties have been assessed, and a price of $1.1 million was set for both. The City has some of the funding set aside for the purchase and is negotiating the remainder.

Nysoe moved to authorize resolution #1489. At the suggestion of Yost, Nysoe withdrew and made a new motion to expressly state the purchase price being fair market minus the $16,000 already paid by the City as earnest money. The contract to hold the property, for which the City had paid the earnest money, has expired, so the landowner is not legally obliged to apply it towards the purchase price. Yost seconded the motion.

In discussion, Council Member Anderson said Ryan Laughery with 30 acres, and the Ogdens with 60 acres nearby told him nobody had gotten back to talk to them about using their land to process the waste by irrigation or underground septic.

Weatherford explained that the discharge on their properties would require much more land since it is a land-use application, and the City would need to discharge 300,000 gallons per day which is far more efficient on the low slope flood plain.

"I struggle with that, especially with what Waitsburg just went through. We're not even sure of the process we are going to use at the wastewater treatment plant that we're gonna build prior to it getting there," said Aukerman

Weatherford expressed concern that the Department of Ecology would start fining Dayton for non-compliance if it appears the City is not moving forward with its plans.

Aukerman said "You can take a step back and still be considered moving forward, and I know that sounds funny, but you can, and Ecology understands that.

Weatherford said it was not up to him to determine if the Department of Ecology might institute fines.

Aukerman replied, "I know it's not. But let's not insinuate that they will because they are forgiving, and they are understanding, and stepping back is not really, not making forward progress, it's showing that you are weighting all options."

Weatherford said the project hasn't gone to design stage yet.

Weatherford: "We've all had monthly meetings between the City, Department of Ecology, Anderson Perry, and all the other entities that have been involved. Each entity reports, talks about it, figures out what the next steps are going to be and each entity has moved this project forward to try to get it where it is now, today."

Weatherford: "Well there's not one person who can make a decision on this project."

Dieu: "I see what you are saying but there's going to be one person that they would go to. You gotta have a president in a country, whether or not that person is going to be arresting the kid down the block. You know what I mean? There's gotta be somebody to go to."

Nysoe, Yost, and McMunn voted for the resolution and voting against were Anderson, Dieu, Aukerman, and Hovrud. Since the purchase was not approved, the WWTP project will have to come up with a different solution.

Sheriff Helm reported his office is making good progress in filling vacant positions. The office has a new lateral deputy starting Monday, who, because he is already serving in another agency, does not need to go to the academy. The Sheriff's office is hiring two other deputies who should start sometime in May. A candidate for the civil deputy position should also start serving in May.

Helm said that once training is completed for all the new deputies, his office will have nine road deputies, the chief deputy, the undersheriff, and the sheriff. A record-keeping assistant civil deputy will round out the department. Helm said he was negotiating with the County to fund another road deputy by the end of the year.

Ryan Paulson, the Public Works Director, implored the public, both in the City and County, to call 811 to locate buried lines before digging. Last Thursday, Paulson reported, a two-inch water main was severed by someone burying a dead horse. It's the law. You may be financially liable if you don't call.

Public Works plans to use clean fill dirt to fill the former city swimming pool to eliminate a major safety concern. Doing so might prevent a serious injury or death, and the fill could be removed by Public Works if the pool is resurrected.

The meeting adjourned at about 8 p.m.