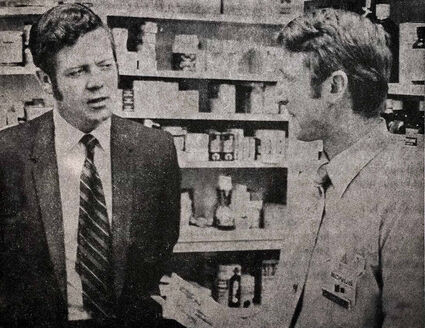 Ross Hamann was led to the Commercial Club meeting recently under false pretenses. Hamann was told his mother, Jan Cronkhite, was again to receive the club’s annual Community Service Award. But, as Tom Baker was describing the recipient, Hamann realized his mother hadn’t been the force behind the new press box and isn’t serving on the Waitsburg School Board. He does those things. Robbie Johnson, the club’s president, said as Hamann realized that indeed, the person they were describing was him, his whole face turned red. “They got me good,” Hamann said with a laugh. “I was fooled.”

In what was probably the largest turnout in city election history, Mayor Tom Baker and the four sitting City Council members vying for another year in office – and newcomer George Downing – were chosen by voters to serve in city government for the coming year. The advisory vote tipped toward contracting with the county sheriff by eight votes, 176-168. A total 363 votes were cast, as of unofficial results available Tuesday, with Baker receiving 222 votes to challenger Lynn Mings’ 125 votes.

[Photo Caption] Jim McDermott was in town last Tuesday morning, and discussed taxes and other government problems with several local citizens. Here he asks Sid Conner about the effect of the inventory tax on his business. McDermott is the Democratic candidate for governor.

Betty Baim, who ranks first in scholarship among the members of the 1947 senior class at Waitsburg High School, has been named valedictorian. Second place goes to Elsie Allman.

Mrs. Ed Henley was entertained Wednesday evening at a surprise party by her daughters Edna and Bess, following her birthday, April 1st.

Charles J. Schlitz, well-known orchardist of this city, concluded the deal this week whereby he becomes the owner of the Elmer Woods place at Bolles Junction. There is a total of 118 acres in the place and consideration is said to be $32,000. There are 40 acres of young orchard.

The great sport with the boys now is catching suckers, the water in the Touchet being too muddy for good trout fishing.

A party was given at the residence of Mr. and Mrs. H. J. Abbey on last Saturday night in honor of Miss Gertrude Powell. Music and games were the principal features of the evening. A very pleasant time is reported.

The wheels for the fireboys new race cart came last week and Arthur Roberts took them to Walla Walla Wednesday where the frame is being made at the Robert’s Foundry and Machine Shops. The boys think they will have a speedy race cart soon.