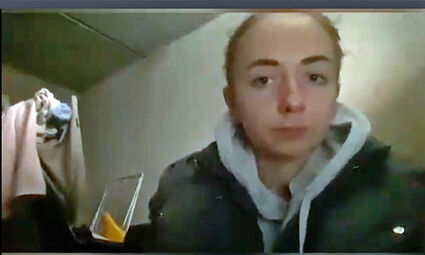 A resident of Kyiv, Ukraine contacted The Times reporter Beka Compton this week. She and her family have taken shelter in the basement of their home.

"My name is Olha, and I am in the capital of Ukraine, in Kyiv. We live in a shelter now. Today is the eleventh day of war, and I want to show you the place I live in."

Kyiv, Ukraine-That was the start of a video sent to The Times via email on Tuesday morning. Reporter Beka Compton had a sinking feeling, knowing that while she sipped her morning iced Americano, the young woman who sent the email was getting ready to hunker down for another night of war.

Olha Oltarzhevksa is a 22-year-old Ukrainian woman. Before the war, she had started taking Spanish courses. She worked as a copywriter and earned a degree in public relations. For the past four years, Olha has worked as a public relations specialist, focusing on media communications.

She has been living with her family, neighbors, and many pets in her family's basement since the Russian invasion of Ukraine began on February 24, 2022. Olha's father was able to create a living area with some of the comforts of home, including bedding and mattresses to sleep on. There are as many as three people sharing a mattress. The youngest resident in their shelter is just two years old

"These are good conditions, because many people do not have the opportunity to lie down," Olha explained in a video sent to The Times.

While the video shows some necessities are available in the make-shift shelter, other day-to-day needs, like showers, are not. Olha said she has not showered in over a week, or had access to a private bathroom space.

The night she took the video, Olha said that they heard nine separate air raid sirens, warning of incoming attacks. She said she knew they would be in the shelter for much longer than they originally anticipated.

"For the time being, we are not going to run anywhere from the city or from the country. Firstly, it is very risky, and secondly, our neighbors brought their children and a large number of pets to us. Therefore, we must take care of them. We are the only ones who have a basement in the house."

It is important to remember that Olha and other civilians have taken shelter in basements of their homes, these are not bomb shelters.

"Tonight, there was a warning that they wanted to blow up the Antonov plant. And it is located about 600 meters from us."

The Antonov Serial Production Plant, formerly AVIANT, is located at the Sviatoshyn Airfield in Kyiv less than half a mile from Olha's home. Antonov is a state owned aircraft manufacturer and builds and repairs commercial and military aircraft at this facility potentially making it a target for attack. Reports of shelling from the Russian military has shown that targets are not all military.

Olha reported that 'representatives of the neighboring country are firing upon women, children, priests, even animals, in the streets.'

"The worst thing is that now Russia is waging war not only on the battlefield, but also on the information front. And if we have already received support from 128 states that say that Russia started a war, all the inhabitants of Russia assume that Putin is saving us from someone. Although we have a very friendly country. And we don't need this salvation that destroys. At the university, I studied journalistic standards. And I know that the author cannot insert personal opinion into the text. But the Russians use the media as a propaganda tool and nothing more," Olha wrote.

Olha said that she was aware of Russian attempts to publish and distribute propaganda reports, pushing disinformation including Ukrainian children in Lviv burning the Russian flag after school each day. Another report framed Ukrainian President Voldomyr Zelenski as a drug addict. She said that some propagandists are writing that Ukrainian people are feasting on the heads of Russian children for breakfast, and that Russian-speaking people are being shot while attempting to flee the country.

The Times was unable to independently verify these specific stories of disinformation. However, the state led propaganda televised in Russia and online has portrayed the war as a 'rescue mission' to stop genocide occurring in Ukraine, claimed the Ukrainian government is led by Nazis, and there was an imminent threat to Russia. All these statements have been labeled as disinformation by international journalists and governments closely following the crisis.

Complicating the situation is the recent law signed by Putin on March 4, 2022, criminalizing any contradiction of the official Kremlin line on this war, a war Putin insists is not even a war. Under this law, to call it a war in Russia could mean a 15-year jail sentence.

A massive amount of real-time information, photos, videos, and accounts have been posted online and covered by local and international journalists and aid workers in Ukraine. This is a war the world is watching.

The Kremlin is making sure to block as much of this coverage as it can, and where it can't, it threatens those who speak the truth with imprisonment.

"They say our president is a drug addict. Although in fact, his bad appearance is argued by the fact that he has not slept for two weeks. Our president is very brave. I didn't expect this from him," Olha wrote.

The young Ukranian said that she is often asked to broadcast live, however, her internet connection in the shelter is unreliable. The Times will be sharing her video, and any subsequent updates, online at http://www.waitsburgtimes.com.