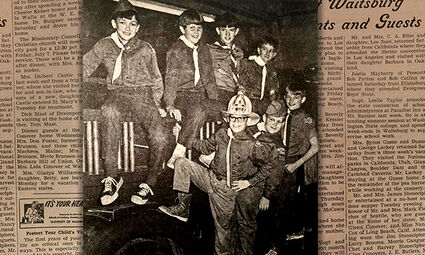 Dayton High School students don’t have to wait for the new skills center to be built at Walla Walla Community College to gain employable skills before they graduate. They can, and many do, enroll in the high school’s welding class to satisfy credit requirements and learn a trade they can use as a career or as part-time work to pay for other education. Steve McLean has been teaching welding at Dayton High School for 33 years. His uniform is dirty blue coveralls with “Boss” stitched to the front. The “Boss” currently has 42 students in his welding classes, which he said is a pretty average number for the term.

Waitsburg City Council voted last week to “pursue negotiations” with Walla Walla County Sheriff Bill Jackson for law enforcement services in lieu of maintaining a marshal’s office in Waitsburg. The action reversed the direction the governing body indicatied at its Feb. 5 meeting. Jackson, attending the council meeting Feb. 19 with County Commissioner Pam Ray, proposed providing services to the City of Waitsburg for the remainder of 1997 for between $96,000 and $100,000. The City’s 1997 police budget is $112,000.

Pictsweet Foods, Inc. spent over $1,350,000 in Waitsburg and vicinity during the year 1946, according to figures released by the local cannery office today.

Henry Conover has been appointed a justice of peace for the City of Waitsburg to replace A. S. Dickinson.

Bluebirds met Monday and held their first cooking lessons. Lois and Louise Dye and Frances Donley made cupcakes and koolaid, and served the girls. Mrs. Brunton, our sponsor, and Judy Brunton, visited during the afternoon. The committee chosen for cooking next Monday will be Deana Land, Lynn Jones and Evelyn Miller.

The purebred hog auction sale, held at Walla Walla last Friday proved to be a very successful affair and the result should prove to be of much benefit to the hog industry in this Valley. Poland China hogs were purchased by C. N. Eaton and J. W. Sweazy.

A number of young people gathered at the home of Celestia Loundagin for a good time Tuesday evening. There were 8 present. Refreshments were served.

Judge H. V. Grubbe was in Dayton Wednesday where he attended a D.A.R. dinner, the guest of the Dayton comrades.

Waitsburg Academy defeated Whitman Academy at football on Feb. 22 by a score of 6 to 0.

Last Wednesday Chas. Shaffer, a young man living near Alto was shooting squirrels with a Winchester rifle when the firing pin flew out striking him near the right eye and cutting a very ugly wound. It is thought that the eye may be saved but it was a very close call.

Col. E. G. Babcock of the Columbian Nurseries made us a pleasant call this week and added his name to our subscription roll. Col. Babcock will soon have the finest nursery and orchard in the state. He is now putting out another orchard of 20 acres.