Reader question: What happened to Cynthia 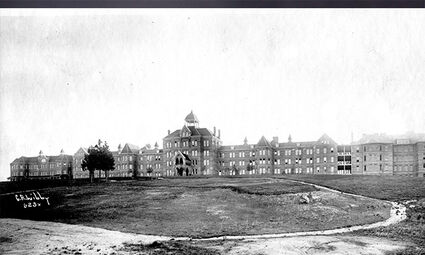 Eastern State Hospital in 1901 was opened in 1891. It was built at Medical Lake and designed after the Kirkbirde plan. This style of asylum had two long wings, one for men, the other for women. They were narrow to allow sunlight throughout the building.

The very first thing I read each week upon receipt of the WT is 'Pioneer Portraits'. I always find it interesting and sometimes humorous. My curiosity was piqued with the 2-5-1897 report of Miss Cynthia Russell, committed to the insane asylum due to reading 'so many trashy novels'. Whatever became of Miss Russell? Or the family? As one suspected of occasionally reading a trashy novel or two, I'm curious as to the outcome of this sad event.

Many thanks for publishing the always entertaining WT.

According to Ancestry.com, Cynthia was born in Minnesota to Miles Russell and Hannah Hill in November 1869. She was 27 years old when she was committed to Eastern State Hospital at Medical Lake, Washington.

When Cynthia was at the hospital, the type of treatment was custodial care. Patients were isolated from their families and daily lives to relieve stress and protect themselves and their communities. Treatment focused on symptoms and included religious actions (prayer, exorcism, study), physical restraint, and other punishments. Most of these treatments were ineffective and custodial care fell out of favor by the early 1900s.

Mental illness and its causes were not well understood at the time, and those who suffered were often stigmatized in their communities. Nervousness, shyness, aggressive behavior, grief, and outsider behavior could lead someone to be committed to an asylum. Custodial care could lead to years at an institution with minimal options for effective treatment.

A list compiled from the logbook at the Trans-Allegheny Lunatic Asylum in West Virginia from 1864 to 1889 has been making the rounds on the internet. It includes politics, reading novels, and laziness. It is usually posted as a humorous example of the reasons people were committed to the hospital.

Patients were treated at the West Virginia Hospital for illnesses including chronic dementia, acute mania, and melancholia. This list was sourced from the hospital's admittance log, and the entries recorded the reasons or cause why those patients were said to have developed their underlying disorders. The healthcare community in the 1800s did not believe novel reading, politics, or falling from a horse were symptoms of mental illness but were factors that may have produced or exacerbated mental illness.

Thank you for the support and letter,