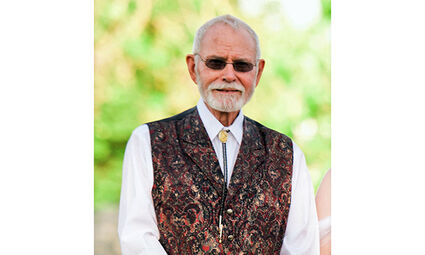 Bob was born in Waitsburg to Lewis and Naomi Patton. Lewis Patton married Naomi Pollard of Huntsville and took over operations of the ranch (Tilted Acres Ranch) on Weller Canyon Road where Bob and his sister, Sereta (Patton) Robinson grew up. Lewis and Naomi Patton made a living raising wheat, cattle, and barley on the ranch. Bob grew up in Waitsburg and lived his entire life in the Walla Walla Valley. He was the firstborn in the family and is a descendant of Lewis and Elizabeth Neace. His sister, Sereta, was born a few years later. Bob graduated from Waitsburg Highschool then moved on to WSU where he graduated with an Animal Science Degree and a minor in music. Bob then came home after college and began operating the ranch for his parents Lewis and Naomi Patton, where he continued to raise wheat, barley, and cattle.

Bob enjoyed many activities and hobbies during his life: singing with the Waitsburg Barbershop Quartet and church choir, donating his time to community events, cooking salmon for the annual salmon feed, acting in plays, like playing the wizard in the Wizard of OZ, at the Liberty Theater in Dayton, skiing in the winter at many of the ski areas around the northwest, playing golf, and doing some boating and fishing as time permitted.

He was active in serving the City of Waitsburg through the Lions Club – served as president in 1973. Became the first president of the newly formed Waitsburg Historical Society to help restore the Bruce House (Bruce Memorial Museum) that is now called the Bruce Mansion Museum Complex. Bob said cleaning and painting the property was quite an undertaking. "There was so much paper and stuff in there, I couldn't believe it. We found where kids had snuck in there so it's a wonder it hadn't caught on fire." He also was a Mason and a Shriner.

A memorial service will be held at the Waitsburg Presbyterian Church at 11:00 am, April 23, 2022, with a reception immediately following the service at the church. Friends and family may share memories of Bob and sign the online guestbook at http://www.mountainview-colonialdewitt.com.