The funds will kick off ADA-compliant remodel efforts 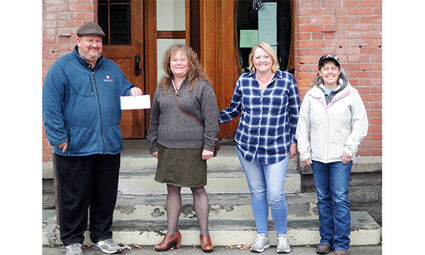 WAITSBURG-It's the season of change and improvement on Waitsburg's Main Street, and the city's library will not be left out. The Friends of the Weller Public Library was recently awarded $7,000 from Columbia REA's More Powerful Together community grant program.

Earlier this year, the City of Waitsburg considered surplusing the building which houses the Weller Public Library, citing lack of ADA accessibility as one of the main reasons. After hearing community feedback, the city opted to keep the building, and the Board of Trustees advised the council that the library was to stay where it was. The issue spearheaded a revitalization and clarification of oversight from the city, the Board of Trustees, and the Friends of the Library. Together a new vision is being created for the future of the Main Street gem.

Friends of the Weller Library President Lisa Winnett said the group found out about the grant program after reading The Times and were later encouraged to apply by community members. Winnett said that she and Tiffany Baxter, who was indispensable in the grant writing process, are grateful for the many community members who offered advice during the application process. It was a learning experience that they would continue to need going forward.

"I have to give a little shout out to Kate Hockersmith," Winnett said, explaining that they had initially reached out to her for a letter of recommendation. "We asked her to write one, and when we asked, she offered to review the grant and made some recommendations to make the application a little shorter, a little tidier- which I really think helped."

Winnett said that the second letter of recommendation came from Terry Lawhead, who serves on the library's Board of Trustees.

Winnett said that Karen and Allen Huwe and Marie and Louis Gagnon have already been busy preparing the library's rear entrance for an ADA-compliant unloading area and entrance. Marie had approached the Waitsburg City Council last month to ask that the large number of pipes stored in the back entrance for more than 20 years, be relocated. Once the city removed the pipes, a walkthrough of the rear entrance found additional issues, including outdated locks and doors. Removing the pipes was the first step to visualizing the necessary changes at the library.

"At first, we thought it was going to be a ramp," Winnett said. "But the board has really been looking into it, and I think they are thinking more about a lift, to lift a person and a wheelchair, up to level to get into the library."

Winnett added that they would have to widen the doorway to accommodate the width of a wheelchair, and the bathrooms need to be updated, as well.

"We told the presenters that we really needed the money," Winnett said. "The group that has been heading up the cement pad, Allen and Karen, and Marie and Louie, they were already needing the money- they have been asking "can we go buy the cement yet?'"

The Friends of the Weller Public Library will be hosting a Monster Mash Bingo this Saturday, October 30, at Waitsburg Town Hall. The fun starts at 4 p.m.