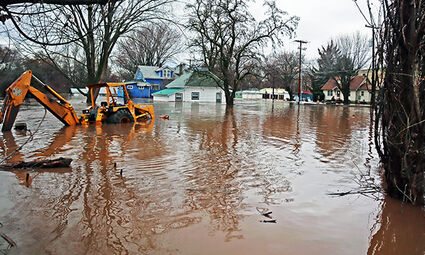 The area of Preston Road flooded in February 2020.

WAITSBURG-Efforts to repair the Touchet River levee that runs along Preston Avenue could be moot if the City of Waitsburg does not get 100% approval from homeowners, including private and state, to repair the existing levee.

In September, the Waitsburg City Council, joined by Senator Perry Dozier and John Wells, Senior Engineer at Anderson Perry & Associates, held a second informational meeting for property owners on rearmoring the existing levee. The city contacted private property owners along the levee in early June 2021. The first information meeting was held on June 16.

At the June meeting, property owners overwhelmingly rejected a design for a setback levee. Many expressed that the plan would significantly alter their property and use too much private land.

An alternative plan to rebuild the current levee was better received by some property owners, however, others will not grant the city the easement rights that are necessary for crews to begin work. The City of Waitsburg will not pursue the project if they cannot get 100% support from the property owners.

At the September meeting, Wells explained that the levee design they are pursuing is not sufficient for a 100-year event, which is required for FEMA flood insurance. However, it will work for a ten-year event and may qualify the levee for the United States Army Corps of Engineers Rehabilitation and Inspection Program. One benefit of the USACE program is a 20/80 cost share, with a public sponsor being responsible for 20% of costs. Until the levee qualifies for the program, the City of Waitsburg is responsible for 100% of repair and maintenance costs.

A ten-year event levee would measure ten feet tall, with at least two feet of freeboard or added elevation for flood prevention measures, according to information provided by Wells.

"The right of ways for a 100-year levee would be much, much bigger than what is being asked for the current levee," Wells added.

City Administrator Randy Hinchliffe said that the city was only asking for perpetual access for flood-related and maintenance purposes. The city currently has access rights to and maintains the levee that runs downriver, west of the Main Street Bridge, and Public Works employees access the levee roughly once a month, Hinchliffe shared.

It's not just private property owners that have a say in the project, however. The Washington State Department of Transportation owns the property that would be used as levee access points on either end of the levee in question (the property behind the Waitsburg Grange and the property directly off the road at the Preston Avenue Bridge). Hinchliffe said that he has been in contact with DOT and has not yet been granted access.

Walla Walla County also owns a section of land on the levee. Hinchliffe said that the county has expressed they would be giving ownership of the land to the City of Waitsburg, lumping it in with other small plots throughout the city; however, that has not happened yet.

"If the property owners say no, then there is no reason to pursue any of it," Hinchliffe said.

One section of the levee, behind a home on Preston Avenue, has a large breach where the bank has eroded, allowing a significant escape point for an overflowing river. Hinchliffe said that the homeowner would not allow the city to build a temporary bank, and he is very concerned about flooding in the upcoming years.

Should the city gain access rights from all the landowners in the affected area, it could be 2024 before work could begin, according to information presented at the September 20 meeting. Before maintenance and construction work could begin, the project must be approved by multiple governing entities, including the Washington Department of Fish and Wildlife, the Confederated Tribes of the Umatilla Reservation, and the Department of Ecology. Comment periods, permit applications, and limited work windows (July 15- Sept. 30) all place a strain on the timeline for the potential project.

The City Council met Tuesday, October 5, for a monthly workshop, to discuss the future of the levee project. Below is a letter the Waitsburg mayor and city council drafted at the workshop, requesting citizen support in protecting all properties in the city from flooding:

We want Waitsburg to continue to be a friendly small town where you know and care about your neighbors. Waitsburg must continue to be a safe community. The 2020 flood irrevocably altered the lives of our neighbors on the eastside of town. Families were displaced from their homes, some never to return again. Property damage racked up repair bills in the hundreds of thousands of dollars. I’m proud that during our City’s darkest days; neighbors from throughout the City filled sandbags, helped rescue treasured family heirlooms and spent countless hours cleaning up mud. I am proud of the City staff members that spent many hours of overtime at all hours of the day and night ensuring our roads and utilities were maintained.

Since the flood, the City has worked hard to repair and upgrade the levee system along the Touchet River and Coppei Creek with the hope of preventing water spillage over the banks again. You have likely seen our crews out doing repair work with heavy equipment over the past two summers. In an effort to complete levee repairs and keep our community safe, we are at a crossroads.

There is a section of the levee system on the eastside of the City where we have asked 18 property owners to come together and decide if the City can access their property, up to 50 feet, to repair the levee. According to verbal and written feedback, more than 75% of property owners along this section of the levee have agreed to participate in this repair effort. Not only could the levee repair save lives and property in the next flood, this repair would be a significant cost-savings to the City and our citizens. Getting the levee back up to the US Army Corps of Engineers standards would transfer the levee back into the federal repair program where the Federal Government would come in and make repairs after flood events: Covering 80% of the repair costs.

The City has no obligation to repair the levee because the City does not own any of the property. Unless each property owner along that section of the Touchet River agrees to let the City onto their property to do the work, the City cannot make the needed repairs. The City has no historical repair precedent because this part of the levee was formerly included in the Coppei Flood District’s responsibilities.

The City wants to repair the levee and take care of it for the foreseeable future. Protecting our City from the floodwaters similar to what we saw in 2020 is the right thing to do. Through hosting meetings with the property owners and speaking to them one-on-one, the City has not been successful in getting four property owners to allow access so that the repairs can move forward. We have evaluated the City’s budget and due to the high cost of the project, we will not be able to compensate any owner for property impacted to fix the levee, and only ask that they provide access as part of the project. The City Council will evaluate the status of the owner buy-in at the Oct. 20 council meeting to decide if and how to take action on the project.

This is not a City Government issue; this is a community-wide issue. We believe as a community, we can work together to solve this safety issue. While the City has not been successful in its efforts to date, we believe neighbors can share stories of the 2020 flood, recalling how frightening it was to wake up at 2 a.m to flood water entering our homes. If you live along the stretch of river and want to see the levee repaired and your property protected, please reach out to your neighbors about the project and urge them to participate. It’s time to have sincere, positive conversations to move us forward. If we do not fix this section of the levee, neighbors will be left in a vulnerable and dangerous position with limited help available from the City.

Should you like more information on this cooperative effort, or the project in general, please feel free to reach out to City Hall.