By Gracie Compton
The Times

Prince is a fun story about the famous singer and performer 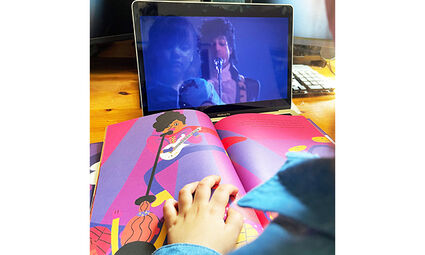 The author watching the music video for Purple Rain after reading Prince. Prince was really talented!

I love new books! Just last week, I was given a new book, called Prince, written by Maria Isabel Sánchez Vegara, and illustrated by Cachetejack. Mom says that it is part of the Little People, Big Dreams collection, celebrating artists, musicians, scientists, and other people who made a big impact on today's way of life.

Prince is about a boy who grew up in Minneapolis, who was an amazing singer. I learned that he played at least twenty seven instruments- that's twenty six more than me if you count my xylophone! He was seven (just three years older than me) when he wrote his first song. He loved music, just like me.

Prince also loved to dance, and studied at the Minnesota Dance Theater, and was really, really good. I think that's why he liked to wear high heels. I'm not a dancer, and I can't wear high heels (Mom's not a dancer, either, and wearing high heels is nothing short of a disaster for her). The book said that he moved like a cat, but I'm having a hard time picturing that- my cat, Yoshi, just likes to nap in the sun.

When Prince was older, he became a real star. They made a movie about him, the book said, and Mom let me listen to his music. She said the song was called "Purple Rain," but I call it "Good Prince" because I think it's more fitting. I've listened to "Good Prince" approximately 300 times since this weekend, and think I may like listening to Prince better than anything else. Some of his music is really funky!

The book said that Prince was often inspired by women, including them in his band as guitarists, drummers, singers, and keyboardists.

I liked reading Prince because it had fun pictures, which Mom said were called "illustrations." There were lots of purples, pinks, and oranges used in the pictures- all some of my favorite colors.

I think this is a book collection I can really get into- maybe I'll read about Marie Curie next!

*Little People, Big Dreams is recommended for kids aged five years and up.