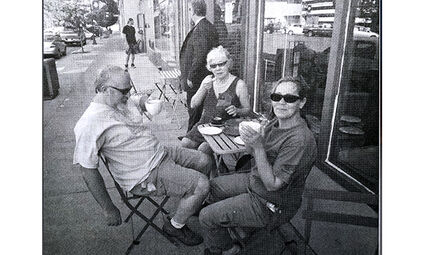 Waitsburg resident Jane Butler, age 90, has deep family roots in the Touchet Valley through her husband Bob. Butler has lived in town about 50 years, non-consecutively, and is being honored for her family history with the Pioneer of the Year award from the Waitsburg Historical Society. “I feel honored,” Butler said of the award. She learned she was to be the honoree at the upcoming Pioneer Fall Festival on Sep. 18 through a letter from Bettie Chase, a member of the historical society. The Historical Society in 1986 began giving awards annually to locals whose ancestors helped the region grow, Chase said. In 2001, Chase herself was an award winner because her grandparents settled in the area in 1865.

Thunder, lightning and a spatter of rain only added to the evening as the Commercial Club served up luscious barbecued salmon for the 38th time Thursday evening. A record crowd of 1,029 diners were accounted for with a record sale of tickets at the gate. The 1995 total was 957, according to Ivan Keve, ticket sales chairman. Proceeds from the event are put to use by the organization throughout the year for projects which include the community swimming pool renovation, Hometown Christmas, Easter Egg Hunt and others.

An issue of great interest to local high school students was decided last Wednesday night when School Board 401-100 adopted a more liberal dress code. The new regulations state that “Pantsuits and pants may be worn as long as they are not grubby." Principals Dick Kinart and Glynn Davis, who will administer the code, defined “grubby” as dirty, unclean and sloppy. The ruling was changed to allow innovations in style to be followed without saying that any mode of dress is acceptable. Included in the stipulations passed Wednesday was the phrase “Hair should be of moderate length, neat, and conform to safety regulations in shop or lab.”

A group of golf enthusiast met in Dayton Monday evening to discuss proposed plans for a Country Club to serve the Waitsburg-Dayton area.

Bailey Funeral Home received a new Cadillac ambulance and funeral coach Wednesday after waiting over a year for delivery according to Gene Ray, owner of the business.

R. D. Roberts has a force of carpenters erecting a large machine shed at the farm southeast of this city.

There are 5,069 automobiles in Walla Walla County according to figures obtained from the auditors’ office.

Among the Waitsburg boys who left this week for State College at Pullman were Jack Beckley, Dick Roberts, Marvin Hales, Dillard Howell and Orin Walker.

Mrs. W. H. Beckley and daughter Adda of LaCrosse moved to town this week where they will spend the winter. Adda is attending the high school here.

The United Artisans, a fraternal order admitting ladies on the same equality as gentlemen, will organize with a good live membership on Wednesday next at the Odd Fellow’s Hall.

Sol Hardman and Pete Wade closed their saloon last Saturday, their license having expired. It is not known yet where’re they will renew their license or not.

Prof. E. Hultsch of Oto, Iowa, has been elected principal of our public schools for the present year and with his wife will arrive next week.