Green Ridge Fire up to 35% contained 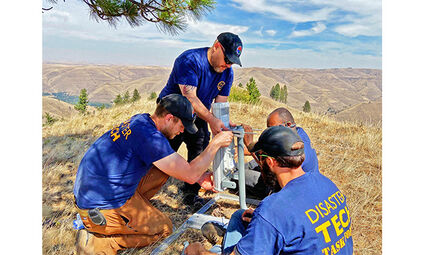 On August 12, the Information Technology Disaster Resource Center (ITDRC) arrived at the Green Ridge Fire's Incident Command post to set up information, communication and technology resources that will allow the ICP to communicate clearly with firefighters on the ground.

UMATILLA NATIONAL FOREST-Good news in the Blues, the Green Ridge Fire has seen minimal growth over the past few days, aided by weekend rainfall and cooler weather.

On Tuesday, August 24, the Green Ridge Fire had burned 39,471 acres, and was 35% contained. Officials report that fuel moisture encouraged less than 50 acres of growth on Monday. While containment did not increase, firefighters are becoming increasingly confident that additional portions of the fireline in Divisions M and K will soon be contained.