A new artist in town

With Alfred Hitchcock peering out of the window, 125 Main gives a peek into the work of new Waitsburg resident, David Gignac. 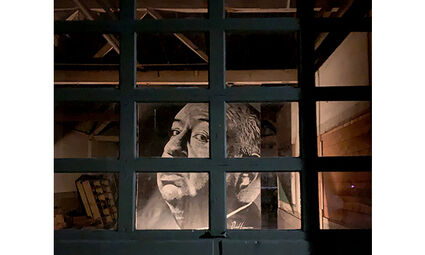 Last year, Waitsburg had a unique look into the new studio and shop at 125 Main. Hitchcock staring the starlings down.

This month, one of the most talented people I know has moved to town. David Gignac has been a close friend, fellow artist, co-exhibitor, and collaborator since I met him decades ago on Whidbey Island. It always amazes me but never surprises me, the ingenious way his mind works. It is always a joy to work on big and small projects, art and building, theater, and real-life problem-solving. I love living in Waitsburg and always hoped I could entice him to make this his home. When Jeff and Gayle Broom showed me their building on Main Street in Waitsburg, I immediately thought of Dave. This is a big space, with a workshop in the back, a rented office space in front, and thousands of feet of open space in-between. There was a gun range in the basement (covered in flood silt) and an elevator for the basement to be used as a fallout shelter. Currently, if you look through the window of one of the two garage doors, you will see a giant portrait of Alfred Hitchcock. A glimpse into the new owner of 125 Main Street.

I asked Dave a few questions to let him introduce himself to town.

Who is David Gignac?

"I have been a working artist on Whidbey Island north of Seattle for the last 30 years. I work in multiple media across the board. Sculpture, painting, you name it.

"I have been a designer at Whidbey Island Center for the Arts (WICA) for many productions since it opened 25 years ago. I have focused on theatrical design for the past eight years, though I have been involved with theater, on and off, for 40 years. It offers an opportunity to flex many different artistic muscles, including sculpture, painting, storytelling, music, light, and immersion. For the last three years, I have been the Resident Scenic Designer handling all designs.

"The South Whidbey Island community has always been very arts-oriented and supportive. It has been a fabulous place to live and breathe art, surrounded by mountains, Puget Sound, and other talented artists."

"Well, guess there is a bit of the import/export model in play getting me here. It started when I delivered a glass and steel sculpture commission to a client in Ketchum, ID. I realized I could pass through Waitsburg, the town my good friends, Gail and Joe Patrick, had recently moved to from Whidbey Island. That was my first visit to Waitsburg, and I fell in love with the landscape, which started to influence my work.

"A little over three years ago, I had the good fortune of meeting Jeff Broom through my friend Lane Gwinn who thought I might be interested in buying property in town. When I toured Jeff's building on Main Street, I had kind of a light bulb moment. This is the shop and studio space I have always needed. My island studio and shop was a tiny 860 square feet. I have done a lot of work in that space, but it was a sausage mill of sorts; the material would enter through a small hole and emerge from the other end of the building as finished work. The work included forged and fabricated handrails, large gates, sculptures, you name it. With the studio's size limitation, the work had to be done linearly, which is very claustrophobic.

"When I walked into Jeff's spacious building, I realized I had outgrown my island studio, and in fact, it might be limiting my artistic growth. It was most likely the reason for my focus on theater; I wanted to do things bigger than myself. At that moment, I could see an exciting vision for my future.

"Jeff had heard about me from my Waitsburg friends and the first words he said to me, with a light smile and a glint in his eye, "you have an interesting job." It feels like he picked me to be in 125 Main Street, kind of a perfect match up."

It has been three years since you bought your building; why has it taken so long to make the final move?

"The decision to move completely took a while to crystalize. I had initially thought I would split my time between Waitsburg and Langley. Moving requires a lot of effort, even in the best of situations. Bringing operations to a halt in a working art studio and the demands of being the lead designer for a busy art center and moving was going to take time. I began the move to 125 Main last year at this time. After setting up studio space in the new building, I realized I could increase my productivity if I did the theatrical design on Whidbey and my artwork in Waitsburg. Compartmentalizing makes a ton of sense, and in doing so, I don't need two studios anymore. So, in the same way, that Jeff picked me, I found the perfect person to buy my island studio.

"A series of things have happened since, telling me, "yep, this was the right choice."

"Last November, after I signed with the buyer of the island studio, I was contacted by the wife of the couple I had bought the building from. She commissioned a set of new art pieces, which would be the last works I would make in my Whidbey studio. How perfect is that, for the final pieces made in that studio, to go to the person who made much of my career possible when they sold their studio to me 25 years ago. The pieces ended up being portraits of the studio and a perfect way to say goodbye.

"I spent the last two and half weeks in the space making those pieces. I did my final load out the day after delivering the finished work, and there are a lot of emotions. Overall, I am pumped to be in this new space, town, and community. The transition may have been long, but it has been exactly right. No fish out of water notes."