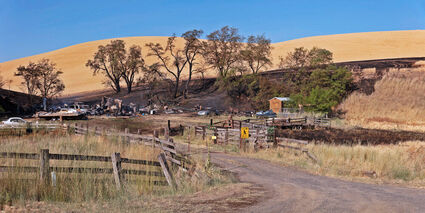 WAITSBURG-A fire on July 9 claimed a barn, an RV, and other parked vehicles at a property on Waggoner Road. Responding fire crews were able to extinguish flames that spread to a nearby wheat field, burning less than one acre.

A neighbor to the property, Lisa Lee, said she was working in her yard when she heard a boom, turned around, and saw a black smoke plume. She immediately ran inside, called 9-1-1, and reported the fire. At the time, she was unaware that it was a structure fire.

"After I got off the phone with 9-1-1, I jumped in my car and raced down there," she said. "It was intense! I started to run down the driveway to make sure no one was in the house, but the heat was so intense I was unable to make it to the house."

She said firefighters showed up almost immediately after her arrival, and their response was "amazing."

"There were at least three engines and a few trucks coming through the wheat fields. They had a tractor out there," she shared. "It was amazing to watch. They were quick to get out there!"

"It could have been a lot worse than it was," Mohney said. "We got it under control, and no one was hurt."

Nobody was injured during the fire, which was contained before it could spread further into surrounding wheat fields. The cause of the fire is unknown.