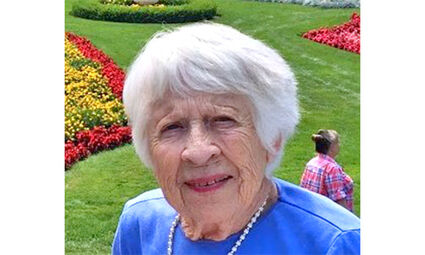 The family lived in Waitsburg until they moved to Dayton WA in 1962. She and Bob moved to Yakima in 1975 and later moved back to Waitsburg.

Jane worked for the State of Washington for over 30 years in various departments in Dayton, Walla Walla, and Yakima.

As a child, her dad paid for a piano teacher to drive from Wenatchee to visit and give her lessons. This led to her lifelong joy of playing the piano and singing for others. Ironically this included her playing and singing for the residents at Booker Rest Home in her retirement years. She was a member of the Presbyterian Church Choir of Waitsburg, Bel Canto Chorus of Yakima, and the Sweet Adeline's, Blue Mountain Chorus of Walla Walla. Jane used to say that all of this was "good for the soul."

As a daughter of a horticulturist, she developed a love for growing flowers. While living in Waitsburg the second time, she grew many flowers and borrowed some from her neighbors to supply the lobby of a local hotel owned by her son and daughter-in-law (Dan and Ginny).

Jane's happy spirit, positive attitude, quick wit, and sense of humor never left her all the way to the end. Throughout the years she was an active campaigner to help her friends and for many community causes. In 2006 she was recognized with the Community Service Award from the Waitsburg Commercial Club. And in 2011 Jane was designated as the recipient of the Pioneer of the Year Award by the Waitsburg Historical Society. She also did a stint as a reporter for the Waitsburg Times and penned 19 articles in the column entitled The Burg. In addition, she was a 70+ year sister of PEO Chapter BE.

Her family was definitely her first love and she spent lots of time attending to the needs of her children and extended family. She was preceded in death by her husband, Bob Sr. and her brothers, Dean and Glenn Nagley. She is survived by her three children, Bob (Peggy) and Dan (Ginny) Butler in Spokane and Babs Butler (Larry) Cerna in Pasco. In addition, Jane adored her six grandchildren, five great-grandchildren, two step-grandchildren, and her one great-great-grandchild.