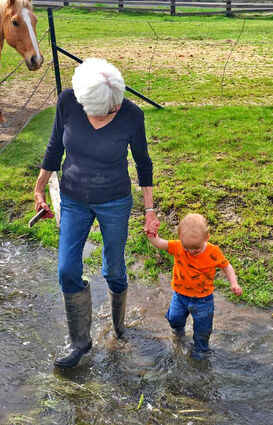 Pam was an Elder in the Christian Church of Waitsburg. Her husband Larry’s family helped build that church. I am not talking about the structure at the corner of Main and 6th Streets but the spiritual community within. On that truth, Pam and I agreed. And on many other things.

She finally agreed to push the boundary more than it had already been pushed and was installed as an Elder of the Christian Church of Waitsburg. She accepted it in the spirit it demanded.

Pam was a teacher. I am not talking about a degree or a certificate, or a job. On that truth, Pam and I agreed. In recent years, she could be seen sitting on the floor with her grandchildren because that is what you do. In the earlier years, she was a mentor to young girls preparing for baptism. She just did the same thing she did in her classroom at school: she would be herself, her principled, humble self.

Humility and principle are often misconstrued, artificially disconnected. Pam did not need to be known as the one coming up with an idea or having a vision for something that would meet a need. She would sit in my office and tell me what needed to be done (“Okay, here’s what you need to do”) or what she was inspired about (“Okay, here’s what we need to do”). Once she had proclaimed the need and the vision for getting it done, she was done. Hers was to see it and say it; it was for others to act on.

I remember when this bugged me, in the early years when I was young and stupid. Then, later, when I was older and less stupid, I got it. Some like to talk and do not want to work. Pam liked to talk. And she worked. Hard. She just knew she could see things, and I learned she could recruit.

Pam took care of me, and I almost missed it. (“How you doin’, kiddo?”) She would follow me into my office after a tough meeting and sit down without being invited (she did not need to be invited) and say, “Are you okay?” Pam invited my wife, Melissa, and me to her family’s table. I invited Pam into my heart. When I decided to leave the church, I went to Pam and Larry and told them first. Because, well, that is what you do.

Who did not know this woman? She knew Waitsburg. After marrying Larry and moving to the house on Wilson Hollow, she planted her flag along with the garden flowers, fell in love with Jasper Mountain, and cared for the land and their home. She took photos of sunrises and sunsets, flowers, and snowfalls. She was busy but did not cloister herself. She was busy with projects and activities, clubs, and events. Busy with kids: her own daughters, other people’s daughters, sons, and grandchildren. Reaching out, encouraging, never giving up on anyone.

“You don’t give up on people. You just don’t do that,” I can still hear her voice.

She was a good teacher because she loved the kids, and she loved God.

Mrs. Conover. Elder Pam. Principled, constant as Jasper Mountain itself. A Christian in the best sense of the word: flawed, selfless, loving, teachable, thoughtful, compassionate. She was my friend, and I will miss her.