Chef Daniel Rossi thought that moving to a small town meant a quiet retirement, until the Main Street Cafe caught his attention 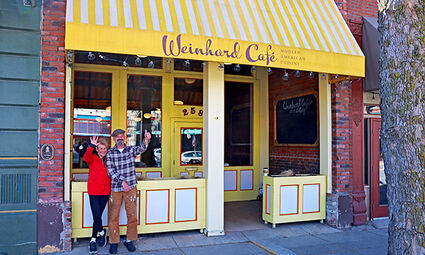 Exciting things are happening at the Weinhard Cafe & Bakery in Dayton. The new owners are busy getting ready to open, bringing a lifetime of culinary experience to the Main Street eatery.

DAYTON-Chef Daniel Rossi thought that moving to a small, rural town like Waitsburg meant he could live out retirement peacefully, picking away at his banjo and sharing his musical knowledge.

In 2020, he hit the road just moments before the global shutdown was announced, escaping the bustling cityscape of Los Angeles and driving north. He spent the pandemic with his partner, Vicki Sternfield Rossi, doing exactly what he set out to do in the first place, for roughly a year. The kitchen kept calling to him and it was just over a year before he started a take and bake meal business, operating out of the Blue Mountain Station.

CounterFeat has been a success, but the experienced chef said that he still wanted something more, craving the busyness of a full kitchen, while still running the small to-go menu on the side. That's when he decided that the Weinhard Cafe & Bakery would be his next venture. Rossi closed on the building, and the business, last week, and is now working towards reopening the beloved cafe.

Rossi has a rich culinary history. He grew up in Milan, Italy, and traveled the world visiting places like New Zealand, Sweden, and India. He has prepared food in fine dining establishments across the world, including Tokyo, Japan, and New York City. He has even molded the next generation of fine chefs, sharing his knowledge at renowned culinary schools like the La Cordon Bleu and the Institute of Culinary Education.

He said that he has no plans to make the Weinhard Cafe into a city-style fine dining restaurant, but instead, would like to stick to the previous owner and operator Mandi Wendt's style, infusing a casual space with to-die-for menu items and small-town prices. He plans on bringing back some community favorites, like the turkey panini and the famous Weinhard house salad.

Rossi said that learning to cook at a more casual level would be yet another learning experience, as he navigates being the only one in the kitchen and gets a feel for what the community likes.

"I have always worked in fine dining establishments," he said. "Seven different sets of hands handled a plate before it was served. Now, it will just be seven fingers, and they will all be mine."

At this time, Rossi does not have a set opening date, taking this time to focus on setting the space up so that it works for him. He will be posting updates on the Weinhard Cafe & Bakery Facebook page, so give them a follow to stay up to date!