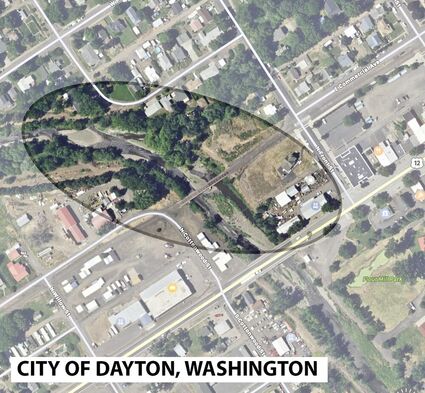 Sediment removal in Dayton, affecting the Touchet River near the railroad bridges at Hwy. 12 and the confluence of Patit Creek in Dayton.

DAYTON-Work to remove sediment from the Touchet River, in the area of the Hwy. 12 and railroad bridges and the confluence of the Patit Creek, is on hold until the Columbia County Flood Control Zone District receives a cultural resource review permit from the Confederated Tribes of the Umatilla Indian Reservation.

Flood Control Zone District (FCZD) Administrator Charles Eaton told the FCZD board of supervisors that he hopes to have the permit in hand this week so work can begin in the next few weeks, as planned.

Eaton said the permit would be for work that is limited in scope.

"We will only be able to do some scalping and will have to come back in July or August to finish," he told the board.

Eaton said the required cultural, archaeological, and historic preservation reviews and engineering and survey design costs are driving the cost of the project upward. The reviews, combined with the need to have a biologist on-site and a FEMA requirement on overtime pay, will bring the project total to $363,000.

He said FEMA would cover 75-percent of costs. Lower priority projects in the FCZD may have to take a back seat, so the District can meet its 25-percent match requirement.

Permit applications for all other flood mitigation projects in the county have been submitted but have not yet been issued. Eaton is still waiting to hear from the Washington State Department of Fish and Wildlife about woody debris permits for the Tucannon River and Patit Creek.

His office has reached out to Senator Patty Murray's office and the federal highway administration for help with the Star Levee. The North Touchet River is beginning to impact North Touchet Road's embankment because of damage to the levee.

Other sources of funding are being identified for the Dayton extension levee rehabilitation project. That project is not covered by FEMA or the US Army Corps of Engineers, Eaton said.

Eaton has drafted a letter to the Walla Walla County Commissioners asking that the Broadhead/Rickel levee and portion of the Coppei Flood Control Zone District located in Columbia County be removed from the Coppei District. The letter will be sent to the county prosecuting attorney for review.

"We have asked them to allow us to assume responsibility for that levee, or sponsorship of that levee," he told the board.

The county has attained rights of entry to inspect the levee. Eaton has notified USACE about the need for a damage assessment.