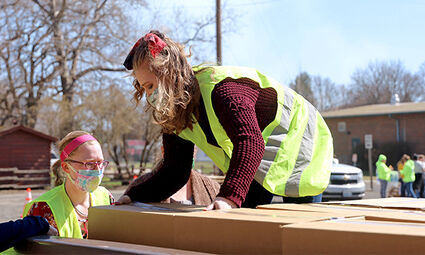 Volunteers from all backgrounds and beliefs handed out boxes of food on March 27, at the Waitsburg Elementary School. Two thousand, five hundred boxes, weighing in at 30 pounds each, were handed out to residents of Waitsburg, Dayton, Prescott, and Walla Walla.

WAITSBURG-Seventy-five thousand pounds of food from participating sponsors was dropped off at the Waitsburg Elementary School parking lot over the weekend. The semi-trucks that hauled it disappeared as soon as the trailers were empty. Countless smiling volunteers helped distribute every single bit of food to anyone and everyone who drove up.

The food was prepackaged in 30-pound boxes. Dairy staples, including yogurt and butter, and other essential pantry items like fresh potatoes, onions, and apples, were included.

Pastor Matthew Wyatt spearheaded the large-scale event, which took place on March 27 in Waitsburg, after seeing the work long-time friend Mark McKee does with Clean Sweep Tri-Cities. This group includes generous people from all walks of life; recovering addicts, ex-cons, friends, and family who work together to give back to their community through volunteerism and service projects. McKee partnered with Marlando Sparks of Tri-Cities, and the New Beginnings Christian Community Church, to lend a needed hand to Wyatt.

"I saw the work that they were doing and reached out and said 'hey, what about bringing this to Waitsburg,'" said Wyatt. "Not thinking they would do it, I immediately got a call back, and they said 'when can we do it?'"

Wyatt worked with McKee and Sparks to pick a time and place that worked well for everyone and started spreading the word as soon as the date was chosen.

The 2,500 boxes filled with donated food came from Washington producers, who received pandemic-relief funds with a caveat that the farmers would need to assemble boxes to hand out to community members in need. Food donors included Butter Creek Livestock, INSP, Cascadia Produce, Farmer Frog, and the USDA Farmers to Families program.

"I thought it was an incredible event," said Wyatt. "There were a lot of volunteers involved, all with different churches and different beliefs, different faiths involved. We all had the same mission: to reach out to those who needed it. None of the disagreements of belief or faith came up; it was just us working together. That should happen more often. No matter what we believe, we can all come together for the greater good."

Wyatt said he wanted to extend a special thank you to Girl Scouts Lili Carpenter and Alyssa Hollingsworth, who helped direct traffic and lend a hand where needed and the Church of Latter-Day Saints missionaries who traveled from Milton-Freewater and Dayton to assist. A big thanks go to all the volunteers who gave their time and strong backs, moving 75,000 pounds of food from semi's to cars to trucks to bigger trucks.

"It was just awesome that no matter what our foundational beliefs were, we all came together to love our neighbor," Wyatt shared.