City officials shared that current conditions are similar to those in 1996, ask residents to be alert and prepared 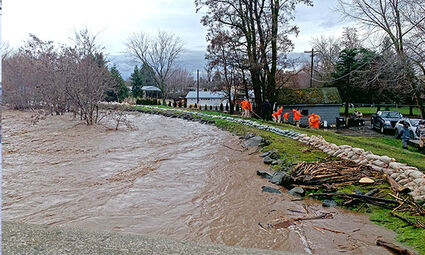 Work being done to shore up the Touchet River east of the Preston Street bridge.

WAITSBURG-Waitsburg officials met Tuesday in an emergency meeting to discuss flood preparedness measures, as winter weather conditions indicate that a high-water event could be likely.

City Councilmember Jim Romine said that the Flood and Emergency Preparedness Committee met and reviewed data and weather from the 1996 flood, finding enough weather condition similarities to be concerned about flooding over the next week. In 1996, the Coppei River experienced extreme flooding after heavy snowfall followed by rising temperatures and rain, and the small river is once again the main point of concern.

Since February 18, the area has received between 12" and 18" of snow, with forecasts calling for rain and winter mixes and rising temperatures for the upcoming week.

"There is a whole lot of snow here, and it's very wet snow," Romine said. "There is ice in the Coppei, and when the water begins to rise and break that up, it starts damming areas up and causes issues."

In previous interviews with The Times, City Administrator Randy Hinchliffe voiced similar flooding concerns as Romine, sharing that the Coppei's riverbed was full of snags and debris. An aging levee near the fairgrounds is also of continuing concern, the city has repair work planned throughout 2021 to address the issues.

Unlike last year's flood, the main concern is the Coppei River. However, there are also areas along the Touchet River, in Huntsville and in Waitsburg along Preston Avenue, that are vulnerable and of concern, said Romine.

Waitsburg residents are being encouraged to be on alert and begin flood-event preparations as a safety precaution. Romine reminds residents to have several days of bottled water and extra food in the home. If you live in a home that has flooded in years past, Romine suggested getting personal belongings out of basements and above floor-level.

The committee is working with the City of Waitsburg to decide the best way to warn residents in a timely manner. Romine was unsure if the committee would be able to use the warning siren historically sounded from City Hall or the siren atop the library. He did anticipate that a warning would be provided in some way. Residents are being asked to monitor the Waitsburg Emergency Updates Facebook page, as well as the City of Waitsburg's website, http://www.cityofwaitsburg.com, for updates.

Pastor Matthew Wyatt said that the Waitsburg Christian Church is preparing to act as the Incident Command Center for the area and as a shelter for displaced families, should flooding occur. This effort would be similar to what took place during the February 2020 flood.

Wyatt shared that they have maintained the records of resources used during and after last years's event. With the experience from the last flood, Wyatt says he and his team of volunteers are prepared to utilize resources in a more streamlined-fashion, should they be needed. Shelter and meals will be available and the plan the church is developing will work within COVID-19 protocols. The church doors will be open immediately should there be a high-water event.

"We will have all of the accommodations that we had last year, the difference being that we will be working within COVID-19 protocols," Wyatt said. "We have enough space in the church that families can stay, but we won't have separate households in the same area. Meals will also be served according to current regulations."

At this time, it is unknown what donations will be needed. Wyatt said that food and other donation requests will be posted daily on his personal Facebook page, as well as the Waitsburg Christian Church page. In the event of an emergency, Wyatt can be reached at (916) 622-9932.