County still working to repair damages from the February 2020 flood 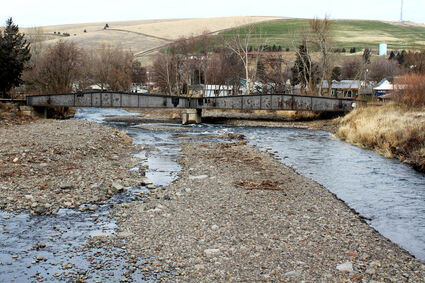 The 2020 flooding event deposited copious amounts of granular debris under the Main Street Bridge and the railroad bridge on the Touchet River. County Engineer Charles Eaton said it will be mid-summer before work can begin on removal.

DAYTON-The Feb. 2020 flood that caused $7.2 million in damages at more than 120 locations has added extra work, time, and stress for County Engineer Charles Eaton and staff in the public works department.

While much has been accomplished to repair flood-related damage over the past year, there are still roads, bridges, and levees in need of repair.

"After that, a bunch of bridges are left," he said, ticking off Bosley, Montgomery, Miller, Smith, Trump/North Touchet, and Vollmer in the Huntsville area. Repairs have begun on the Baileysburg Bridge but have not been completed.

"We have to build a bridge at Coates Creek at the north end of Wolf Fork Road where a culvert washed out. Because of the Endangered Species Act, we can't just replace the culvert," he said.

That comes with a price tag of half a million dollars, he said.

The flood shifted and moved large amounts of granular debris in the Touchet River, and in some places, there are deposits of between five and seven feet, he said.

The county has applied for emergency permits for the removal of the deposits from under the Hwy. 12 bridge and the railroad bridge on the west end of town.

"You can't even stand up under the rail structure anymore, so much rock has been deposited underneath that," he said.

The county needs a Joint Aquatic Resources permit authorized by multiple agencies, a time-consuming process to remove the deposits.

Eaton said the permitting process for removing woody debris from the Tucannon River has also been delayed.

The county initially submitted one permit for work on both the Tucannon River and Patit Creek. However, the Washington Department of Fish and Wildlife has requested the county resubmit a separate permit application for the Tucannon River repairs because the work to be done is on private property.

"It will be in the summer before we get there," he said.

Eaton said the U.S. Army Corps of Engineers is currently repairing the Camp Wooten levee. Repairs to the Starbuck levee were finished by the Corps three weeks ago.

The Star levee, which protects the old grange hall and school on South Touchet Road, and the Dayton Extension levee next to the city's wastewater treatment plant, await repair.

A levee failure at Huntsville caused substantial damage to the road, Eaton said. That levee was sponsored initially by the Coppei Flood District and was part of Walla Walla County's jurisdiction. It is now considered "orphaned." The Corps has not inspected it because there isn't technically a sponsor for it. Jurisdictional issues will have to be sorted before work can begin, he said.

There is a mountain of paperwork to submit to the Army Corps, the Federal Highway Administration and FEMA, in order to get work done, and to be reimbursed for costs, said Eaton.

The county has not received any reimbursement from FEMA.

"We have been working on the first set of projects for three months, and we still don't have all the paperwork together to get it submitted. That's for the first half a million in reimbursement," he said.

Eaton said there had been progress. So far, 2.5 million in damages has been addressed.