Can Dayton become a boom or "Zoom" town? 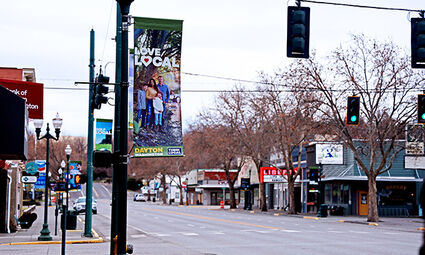 Bringing broadband connection and more affordable housing to Dayton would be key to making the Columbia County city a zoomtown.

DAYTON-When offered a chance to work remotely, more and more people are moving where they choose. If the City of Dayton and the Port of Columbia play their cards right, Dayton, with its beautiful blue skies, friendly people, and green vistas, could become the next little boom, or "Zoom" town.

When the question of whether people should consider moving to Dayton was posed to Port of Columbia Executive Director Jennie Dickinson and City of Dayton Planning Director Meagan Hayes last week, the answer was a resounding "yes."Dickinson said having more people in the community would mean more dollars spent in local stores and restaurants, more students in the schools, more customers for the hospital district, and a healthier tax base for the city and county to pay for essential services.

When asked how growth can be achieved, Dickinson pointed to the need for housing to attract and retain workers, along with the need for state-of-the-art internet service. The Port is working to bring broadband to the community, and Dickinson is looking into funding opportunities.

"We can be a Zoom community for those that don't require high-speed internet as long as they have good enough service to operate a Zoom meeting. We would need better broadband to truly become a Zoom community," Dickinson said.

Hayes agrees with Dickinson about the need for growth.

"We need growth, as the city has fairly clearly indicated. We can't sustain at this pace anymore," she said.

Does Hayes think Dayton is on the verge of becoming a boomtown?

"We're headed in the right direction," she said. "Anecdotally, if you look at the housing market, I would say, definitely."

Hayes is tracking realtor sites. She said one property sold for higher than the asking price two days after it was listed. Also, vacant lots are selling quickly. She said she is getting emails from people outside the area asking for information about the process for building.

People might be moving to Dayton because housing is more affordable, here.

As the prevailing wage goes up at the state level, there are historically more building starts. When homeowners look to move to new areas, developers and realtors can gain control of the market. Aggressive marketing can make a place attractive to new residents, increasing competition between home buyers and causing property values to rise steeply. Hayes said in an attractive area like Walla Walla, people end up paying double what they should.

One step the city is taking is through the formation of an Affordable Housing Commission.

Hayes refers to housing for people who are the "glue" in any community – people like firefighters and teachers.

She also hears from senior citizens who would like maintenance-free cottage homes, people who want quality single-family homes, and those looking for multifamily homes.

"We're just missing a lot. We have a lot of really beautiful historic homes, but that is not what everyone wants," she said.

Hayes and Affordable Housing commissioners are working to create a new digital marketing campaign platform. When completed, the website will provide developers, contractors, property owners, and realtors, with building information for Dayton.

"This is for the Average Joe, who buys a lot in Dayton and what the process is for building on it," she said.

In addition, the Affordable Housing Commission is looking into everything the state allows that will help with the housing situation.

For instance, the Washington State Constitution allows cities to surplus or give away public-owned property. Recent state legislation has streamlined that process. Hayes said the Affordable Housing Commission and the Dayton Planning Commission have established a Real Estate Review Committee to review and recommend properties that could be sold as surplus or given to the city for housing. Exploring a multifamily tax exemption will be the topic of the next meeting of the Affordable Housing Commission on Feb. 9.

Hayes said the city can help builders keep costs down by reducing impact fees. In addition, development agreements can be written to include some variation in development standards.

Community Land Trusts(CLT) are another option, Hayes said. The land under new homes is held in trust. People buy only the houses, and are not burdened by the cost of the land. Homeowners can build equity, and most CLTs have provisions that keep the housing affordable for future homebuyers.

"It's not for profit," Hayes said about housing trusts. "It's for the betterment of the community."

She pointed to the seven acres of Port-owned property, west of the Blue Mountain Station.

Jennie Dickinson said while there have been no specific proposals for developing housing on the seven acres, the Port would be open to that. It is zoned Ag-residential, which means houses can be built there as long as water and sewer utilities are available.

With planning, innovation, and development of desired infrastructure, the Port of Columbia is confident that Dayton will continue growth and healthy housing development.